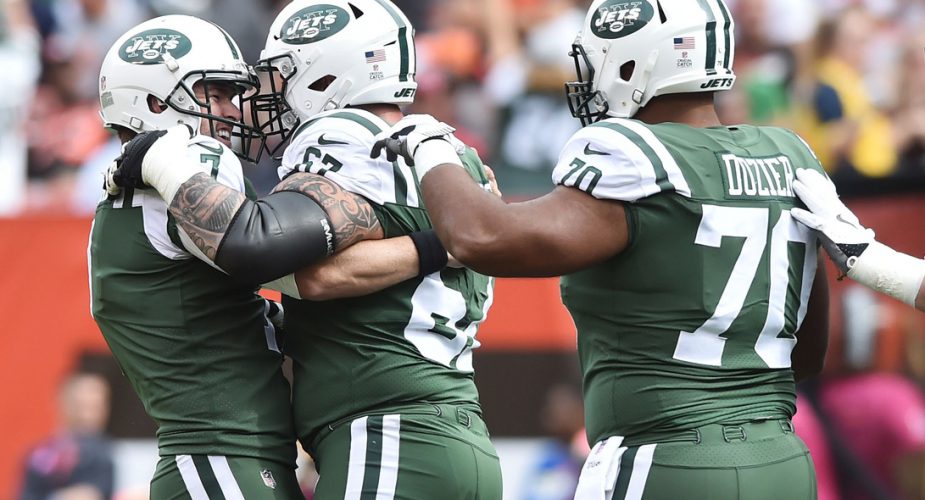 In what may have been their worst game of the year the Jets squeaked out a “butt ugly” 17-14 win over CLE.  Thanks to CLE ineptitude in leaving 23 points on the field and wasting timeouts the Jets overcame their poor play to fall into a three way tie for first place.  Other than a few key plays there weren’t many positives in the review of the tape.  Let’s take a look:

– OLine was spanked in both run & pass blocking.  Add in way too many penalties and you have a mess.  Credit to CLE DC (Gregg Williams) for breaking out some old school Buddy Ryan “46 Defense” to clamp down on the running game.

– DLine was pushed around in the run game and they didn’t bring enough consistent pressure.  Muhammad Wilkerson’s name was finally heard, unfortunately it was for two personal fouls.  The absence of Kony Ealy was very evident.

– Credit to both Lachlan Edwards and Chandler Cantazaro.  With offense doing nothing Edwards kept CLE backed up with his punts.  And Cantazaro shockingly gave the team a lead at halftime with a massive 57 yard FG.

– Solid game for Josh McCown as he kept the mistakes to a minimum (1 INT) as he was under pressure.  And when he had the opportunity to put points on the board he threw two sweet TD’s to Austin Seferian-Jenkins and Jermaine Kearse.  Excellent management of the game late as he made safe decisions and drained the clock.

– Did the injury bug bite Bilal Powell again?  He left the game early and never returned. With Matt Forte out this was his time to finally take the #1 spot, now is not the time to miss games.

– For the first time Marcus Maye out shined Jamal Adams.  Maye was excellent in coverage, run support and had his first INT.  Adams struggled missing a key 3rd down tackle and gave up a TD to Njoku.

– Morris Claiborne had an excellent game with multiple PBU’s and an INT that jump started the offense.  Marcus Williams was picked on all day and gave up multiple catches to very pedestrian WR’s.  The absence of Darryl Roberts and Juston Burris hurt.

– Half credit to Darron Lee & Demario Davis as they both had multiple “splash” plays. Lee had a couple of TFL’s which highlighted his speed and Davis had a sack and brought good “A Gap” pressure on Claiborne’s INT.  But they were not consistent in filling their lanes in run defense.

Let’s go over the multiple key plays that allowed the Jets to win:

– Freddie Bishop fumble recovery which cost CLE a TD
– Marcus Maye INT which cost CLE a TD
– Two missed FG’s
– CLE bypassing another FG to go for it on 4th down.  Not getting it AND wasting a timeout
– The 96 yard TD drive after CLE didn’t get the 4th down play.  Key catches by Eric Tomlinson,
Jeremy Kerley and Jermaine Kearse
– Morris Claiborne INT which set up a TD
– The 57 yard FG by Chandler Cantazaro at halftime

In closing it wasn’t pretty but the Jets will be playing for first place next Sunday.  Who would’ve thought that?  Also for those who were rating the Jets 2-2 record, JAX destroyed PIT 30-9 and MIA beat TEN.  Just saying.