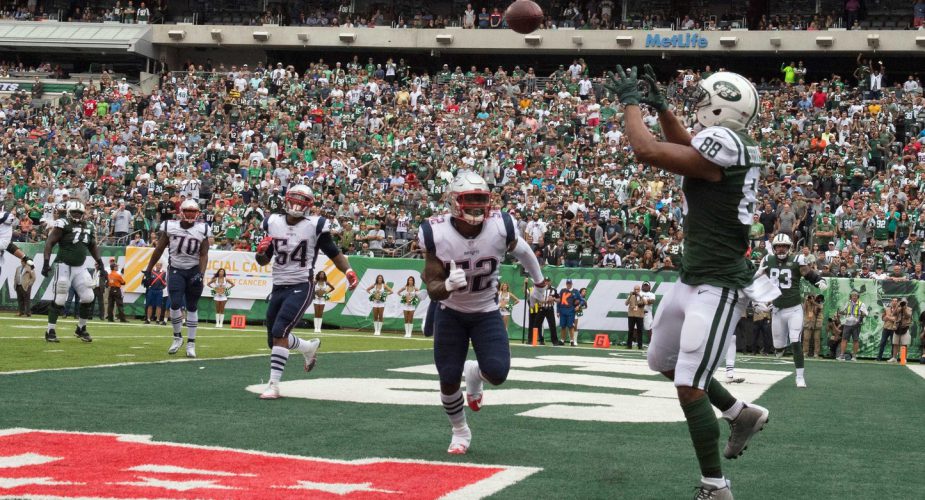 There are no “moral victories” in sports you either win or lose.  So even though the Jets put up a good fight their inability to take advantage of opportunities led to a frustrating 24-17 loss.  An offensive “brown out” and an unbelievable TD reversal that left me speechless were just some of the key plays, let’s take a look:

– Josh McCown had his best statistical day and started out on fire.  But after getting up 14-0 he allowed the offense to “brown out” on four drives before halftime:

It appeared as the game went along McCown focused more on Anderson than other receivers. NE never had an answer for Jeremy Kerley, Jermaine Kearse, Austin Seferian-Jenkins and the checkdown pass to the RB’s.  A more diverse approach may have helped continue the momentum the offense had early on.  Also for a 38 year old QB it’s inexcusable to waste two timeouts within three plays in the second half.

– The OLine had no push in the running game, the pass protection was decent but with NE having no speed in their front seven it should’ve been better.  The penalties have got to be cleaned up they are committing too many “drive killers”.

– Matt Forte is basically a “one trick pony” right now.  He’s still excellent in the screen game but he shows no burst to the hole when running the ball.  Bilal Powell needs to get healthy (when???) and the run game needs to be turned over to him and Elijah McGuire.

– As stated before excellent games by Kerley, Kearse and Seferian-Jenkins they needed to see more balls.  I didn’t want Kerley back because I wanted the young WR’s to get more reps but he has been outstanding.

– What’s to say about the Seferian-Jenkins TD reversal?  It’s like the review official was looking to influence the game.  I could understand if the ball came out of his hands but he bobbled it and re-gained possession.  Credit to Seferian-Jenkins for the way he handled after the game, no whining or crying.

– The defense did a good job early on holding NE in check and forcing two turnovers in the first half.  But the DLine was bad in both run defense and generating pressure.  No impact from Muhammad Wilkerson again and for a guy whose 6-3 and 330 Mike Pennel isn’t as stout as I would expect from a NT.

– Buster Skrine had an impactful game with an INT, a fumble recovery and decent coverage on Hogan and Amendola.  But the INT that he dropped was a killer, it would’ve given the Jets the ball at midfield with a 14-0 lead.  Instead a few plays later NE scores their first TD. When you have NE making mistakes you have to take advantange.

– Darron Lee flashed today with a forced fumble, a couple of nice open field tackles and some nice coverage on NE RB’s.  But he has to have better ball awareness when trying to cover Gronkowski.

– Jamal Adams got his introduction to Gronkowski by giving up his first TD and just missing on a PBU that would’ve prevented his second TD.

– You have to love Ardarius Stewart’s aggresiveness on kick off returns but he has to learn to stay in the end zone on “lob kicks”.