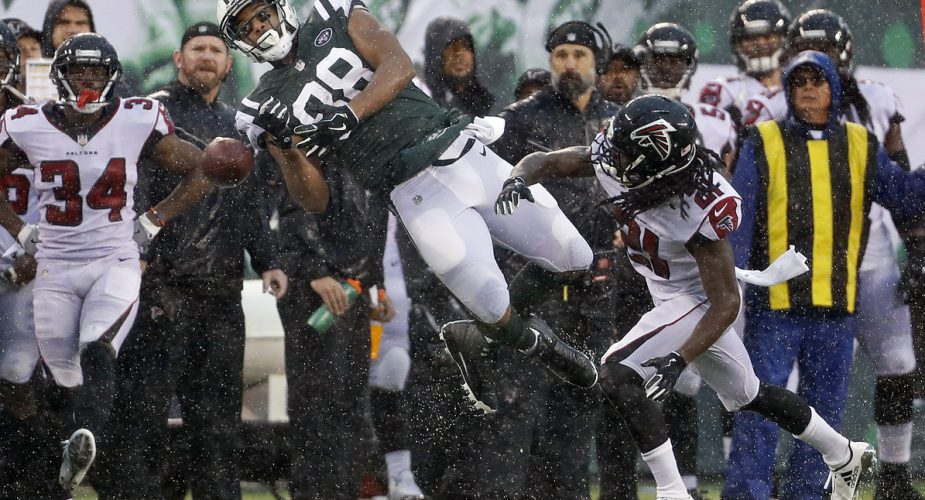 The Jets faced the Atlanta Falcons at MetLife Stadium on a rainy day and tried to get back into the win column after a tough loss in week seven to the Miami Dolphins. New York had their hands full with QB Matt Ryan and the high-powered Falcons offense. Though ultimately, their inability to convert after turnovers proved to be the difference.

The Jets came out for the third game in a row and scored on their first drive. This time on a 20-yard touchdown to WR Eric Tomlinson.

K Chandler Catanzaro made field goals from 43 in the first quarter and 46 in the fourth quarter.

QB Josh McCown hit WR Robby Anderson for a 24-yard second quarter touchdown. Anderson led all receivers with 6 receptions for 104 yards and a long of 32.

Catanzaro missed field goals of 46 in the first quarter and 48 in the fourth quarter.

At the half, the Jets only had 8 first downs.

RB Bilal Powell led all Jets rushers with 33 yards on 14 carries. The team’s rushers only gained 43 yards total for the game.

The Jets only produced 3 points off of the two first half turnovers.

WR Jeremy Kerley made a costly turnover on a punt return which gave the Falcons great field position and ultimately led to a 29-yard field goal by Atlanta’s Matt Bryant.

The Jets had multiple opportunities with good field position and failed to deliver.

The team is now 3-5 and has lost three games in a row.