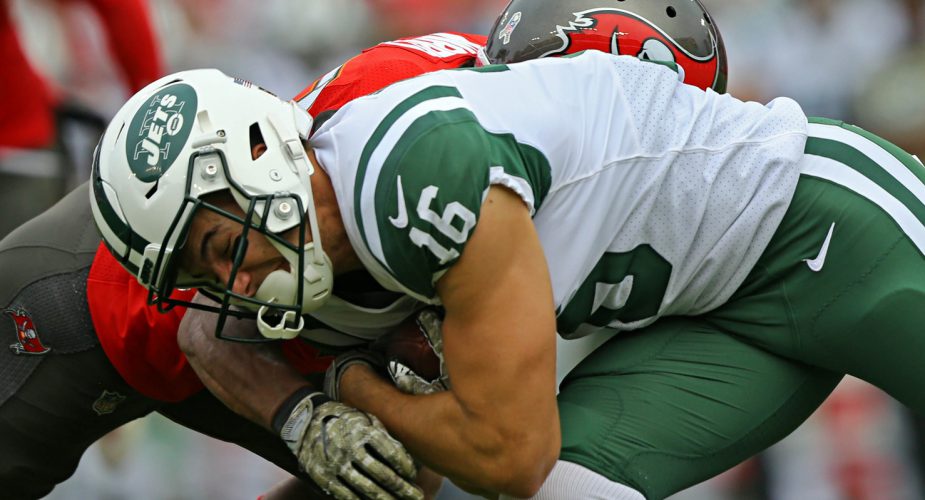 The 4-5 Jets traveled to Tampa Bay to take on the 2-6 Buccaneers at Raymond James Stadium. They played against a familiar face in QB Ryan Fitzpatrick who started in place of the injured Jameis Winston. Both teams were missing key offensive starters: WR Mike Evans (suspended) for the Bucs and RB Matt Forte (knee) for the Jets. New York running backs Bilal Powell and Elijah McGuire handled duties in the backfield.

CB Darryl Roberts picked off a Fitzpatrick pass and got his first interception as a professional.

K Chandler Catanzaro hit a 47-yard field goal just before the half.

New York failed to score any points in the first quarter. The team only had 7 first downs and 166 total yards on 50 yards rushing and 66 yards passing. They also had 5 penalties for 44 yards in the first half.

The Jets gave up a 44-yard punt return in the second quarter.

The defense gave up a 6-yard touchdown pass to RB Charles Sims.

QB Josh McCown had a pass intercepted in the second quarter.

Powell fumbled near the end of the third quarter and gave the Bucs the ball near midfield.

S Marcus Maye was called for illegal contact as he intercepted a pass by Fitzpatrick.

By Universo Pereira
Posted on November 12, 2017