– An absolutely putrid effort by the Jets with the main culprits being the defense and special teams.

– A horrible display of discipline as the team committed 10+ penalties. On offense most of them pinned the team back and destroyed drives.  On defense the penalties extended drives and led to NYG points.

– Good efforts by Lachlan Edwards (P) and Jason Myers (K) as they were .the only two players who didn’t screw up all night

– Other than that there were mistakes in punt coverage, PAT and ball security on kick off returns.  Inexcusable error by Charone Peake? as he left his lane as a gunner which left the whole side of the field empty on the TD return.  Poor discipline by Jonotthan Harrison on the PAT as he moved early which led to Taylor Bertolet missing from 38.  Trenton Cannon must show better ball security, that’s two muffed punts and a fumble on specials in only two games.  In addition there were at least two other penalties on kick off returns which took the offense out of good field position and pinned them inside the 20.  A lot of players put themselves on the chopping block with how they performed. 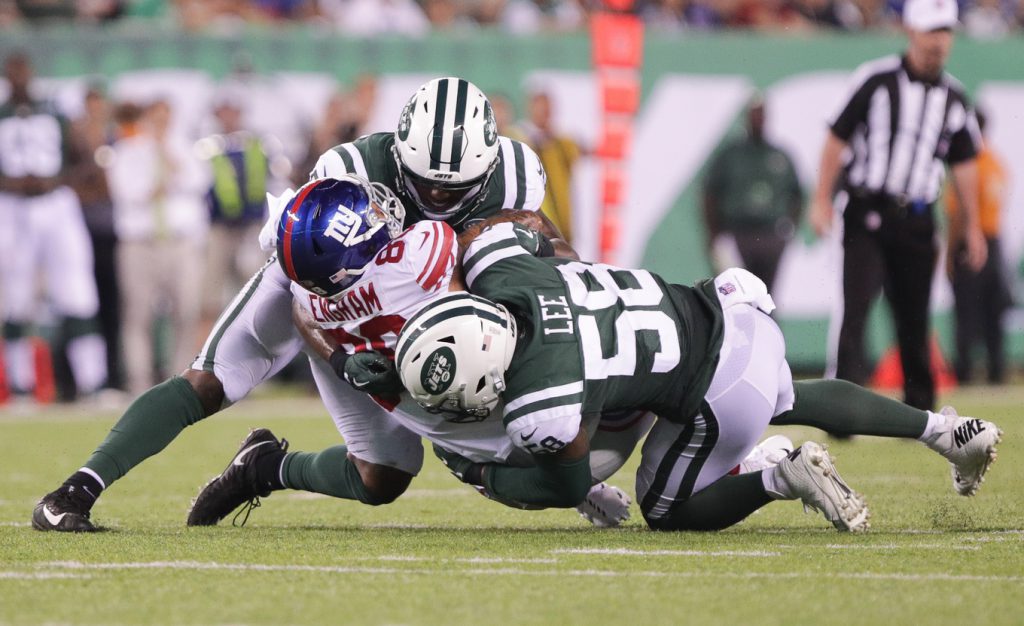 – Yes, the defense hasn’t given up a TD in the pre-season but they have been softer than cotton.  They aren’t getting off the field on 3rd downs, the offense is gaining too much in field position and controlling the clock.  If the defense does stop them our offense is pinned back which causes them to be conservative to protect a young QB.

– The secondary gave up too many long receptions which flipped the field.  Some of the culprits were Mo Claiborne, Juston Burris and Buster Skrine.  Jamal Adams was one of the few players who had a strong game as he had a couple of TFL’s.

– The ILB’s were good in run support and Avery Williamson had an absolute textbook strip to cause a fumble.  The OLB’s had no impact and Jordan Jenkins had a killer penalty on 3rd down which extended a drive in which NYG scored a FG.  Frankie Luvu had a sack in the second half, can he develop into any kind of consistent edge presence?  Because the pass rush has been missing in action.

– The DLine was excellent in stopping the run but again brought no consistent pressure. Leonard Williams was active with a fumble recovery (40 yards), TFL’s and making plays up and down the line.  Henry Anderson was able to draw a couple of holding penalties with his penetration into the NYG backfield.

– Sharp performance by the offense early on as they were able to score two TD’s by the start of the second quarter.  Nice wrinkle by Jeremy Bates in using three TE sets to assist the OLine while still providing Sam Darnold with receivers.

– The defense and special teams poor play had a direct impact on the offense.  Both units caused the offense to be pinned back inside the 20 multiple times which led to conservative play calling and zero production.

– The OLine was solid in pass protection but inconsistent in run blocking.

– Poor effort by Eric Tomlinson in blocking as he was hit with two penalties which destroyed drives.

– Nice to see Quincy Enunwa and Terrelle Pryor on the field and contributing.  Mixing those two in with Robby Anderson and Jermaine Kearse should give Sam Darnold a good corps of WR.

– Sam Darnold remains on track to be the starter in my eyes.  He made a mistake by drawing an intentional grounding penalty and the play clock got down to 1-2 seconds a couple of times.  But when given good field position he led the team to two TD’s by the start of the second quarter.  The defense has got to be better on 3rd down to give Darnold the ball more times and in decent field position.

Stop by our forums and tell us what you think about the Jets \ Giants game.