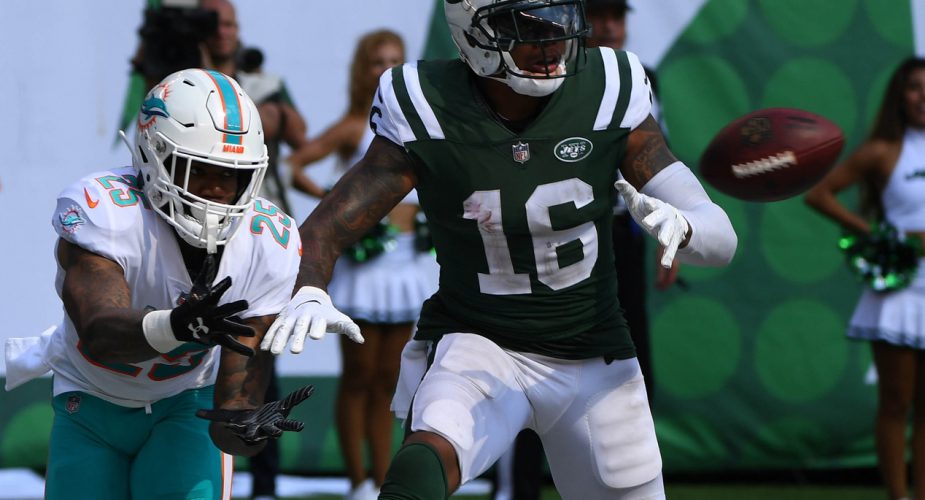 A frustrating home opener as the Jets lose to MIA 20-12, basically the whole game can be wrapped up in one phrase, “missed opportunities”.  Let’s take a
look:

– A total turnaround from the DET game as the special teams couldn’t flip field position and left the offense in negative territory all day.

– Lachlan Edwards had decent distance and hang time on his punts.  Jason Myers scored half the the points on the day and had an impressive 55 yard FG.  But missed PAT’s will get you cut (missed opportunity).

– Andre Roberts was taken out of the game as MIA punter & kicker had him fair catching all day.

– Caught an awful break on MIA second punt as they bounced the snap and got a 30 yard roll to pin the team at the 10 yard line (missed opportunity).

– Awful day for the rush defense as MIA was able to move the ball at key times and eat clock.  Also they never had an answer for Tannehill’s designed runs which
killed them on multiple occasions.  The pass defense was solid holding MIA under 170 yards but the 3rd & 19 screen to Gore was a back breaker (missed opportunity). It brought back memories of other Jet defenses not getting key stops when it counted.

– A new DLine scheme which had 2 DL and 2 OLB rushing the passer brought more pressure but I wonder if that left them vulnerable to the run.

– Avery Williamson got burned in coverage a couple of times and didn’t have an impact in the run game.  Darron Lee had nowhere near the game he had in DET.

– Jamal Adams would’ve had an A+ game as he was all over the field with a sack, forced fumble and good coverage.  But on the 3rd & 19 to Gore it seemed like Adams was responsible for covering him and he got caught up in the line.

– The OLine got pushed around all day in both phases.  Spencer Long struggled getting movement in the run game, James Carpenter and Kelvin Beachum picked up killer penalties.

– Poor ball security by Robby Anderson and Terrelle Pryor killed the team.  Anderson fumbled when the team would’ve had a first down at midfield trailing only 7-0 (missed opportunity). And Pryor did an awful job finding the ball on the INT in the end zone which would’ve made the score 20-13 (missed opportunity).  Which is too bad because other than that Pryor was very impactful (4 rec / 84 yards).

– Quincy Enunwa was a beast making tough catches (7 rec / 92 yards) and running over people all day.  And he almost made an incredible TD catch at the end of the first half as Sam Darnold was throwing the ball away.

– Bilal Powell struggled running the ball but was a terrific outlet for Sam Darnold in the passing game (5 rec / 74 yards).

– Sam Darnold will get “credited” with his first loss and two INT’s but there was a lot of encouraging things to take from his performance.  In only his second game where his OLine struggled, had no running game and his receivers had awful ball security he was able to keep the team in the game.  Darnold got banged around and was still able to be productive (25/41 334 yards) and maintain his accuracy.

You can comment on this and see what other fans are saying in our NY Jets message board.