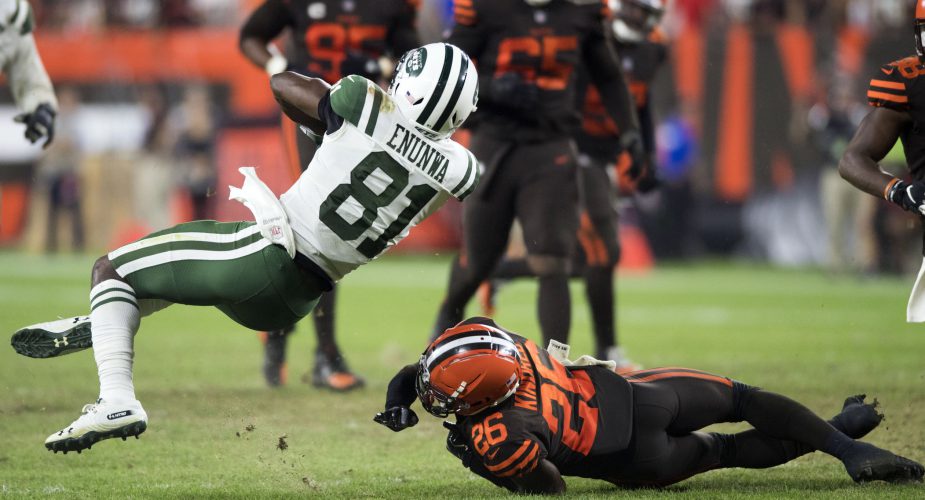 – It was disgusting the way the NFL network was waving the orange pom-poms before the game.

– It was disgusting how this team continues to repeat the same patterns that lead to losses.  Pre-snap offensive penalties that kill field position, idiotic personal fouls that change momentum, horrific ball security and sloppy defensive penalties that gives the opponent more downs.  When patterns continue to repeat and don’t get better that points directly at the coach.

– Disgusting field conditions in CLE, why was their field so patchy?

– And from a social responsibility point of view it was disgusting how everyone was giggling about releasing free beer into CLE.  What could possibly go wrong?

– Solid jobs by Jason Myers and Lachlan Edwards in all their opportunities.

– Andre Roberts had a better day but of course one of his KO returns (35+ yards) was cancelled by a holding penalty.

– Great job by Kevin Pierre-Louis on the punt block which set up the first TD.

– Good games by Avery Williamson, Darron Lee, Henry Anderson, Jordan Jenkins and Doug Middleton.  But a dropped INT by Middleton in the end zone was a killer.

– What is Trumaine Johnson doing taking a personal foul penalty when the team is off the field???  Granted it didn’t cost them points but it killed field position for the offense.

– The worse thing the defense did all night was get Tyrod Taylor out of the game. Because Baker Mayfield picked them apart, was that because of fatigue?

– The three TE formations were back and the running game perked up which saved the offense because the passing game struggled.

– When is this OLine going to stop with the killer pre-snap penalties?

– Is this a new pattern for Robby Anderson where he fumbles once a game?

– Disgusting selfish penalty by Isaiah Crowell after his TD.  And to giggle about it after the game just makes it worse.

– Good games by Bilal Powell and Quincy Enunwa as their efforts basically carried the whole offense.

– Sam Darnold had his worse game as he was basically a game manager of a very conservative game plan.  He needs to develop better chemistry with his other receivers because he’s forcing everything to Enunwa.  Good mobility in the pocket allowed him to get away from CLE rush.  Awful INT that basically ended the game as Darnold forced it into double coverage.