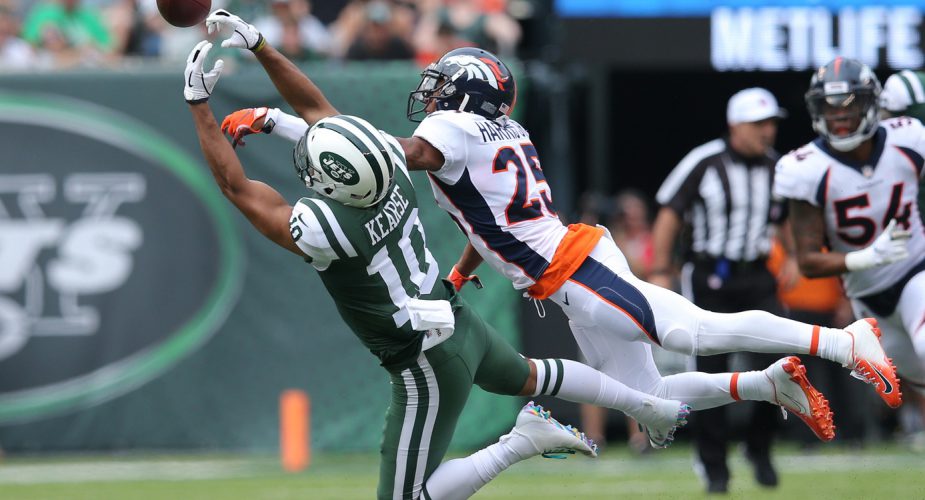 After an awful three weeks of football the Jets finally put together a complete effort and defeated DEN 34-16.  A game that started with two “here we go again”
moments (Bilal Powell fumble & Jason Myers missed FG) changed on the first of three huge offensive plays.  Shockingly Von Miller, Bradley Chubb and Shane Ray were neutralized by an OLine that had been struggling, let’s take a look:

– Lachlan Edwards was excellent again and it seems like he’s finally ended our search for a punter.  Even though it didn’t matter in the final score, Jason Myers has got to tighten up his kicking.  You can’t miss a 30 yard chip shot

– Uneven game by Andre Roberts, he had that game changing 50 yard punt return. But his other punt and kick returns weren’t great.  What I don’t want to see
is Trenton Cannon returning punts again this year.  I know Roberts was banged up but Cannon is totally unreliable.

– A lot of different schematic looks today.  In the nickel there were a ton of 2-4-5 formations with the two OLB’s standing up on the line to bring pressure. Also Mo Claiborne floated back to safety and almost tricked Case Keenum into an INT.

– Leonard Williams has been a disappointment through the first four games of the season.  But today he was the best defensive player on the field.  Williams was excellent as he dominated in both phases with multiple sacks and TFL’s.

– Another good game by Henry Anderson as he was solid in run support and pushed the pocket in the passing game.

– Solid games by Brandon Copeland, Frankie Luvu and Jeremiah Attaochu.  Attaochu was particularly effective as he got a strip sack and generated a holding
penalty coming off the edge.

– Strong game by Mo Claiborne as he was good in coverage, almost had two INT’s and was solid in run support.

– Darryl Roberts and Parry Nickerson were solid as they stepped in for Trumaine Johnson and Buster Skrine.

– Marcus Maye finally looked like himself today as he was all over the field. Helping the CB’s in coverage, delivering big shots to receivers and almost scoring on a 105 yard INT.

– A total “fantasy football” game by Case Keenum.  As he generated a ton of “pretty stats” but they were meaningless because the game was already decided.  When the Jets were on a 34-3 run Keenum was nowhere to be found.

– The OLine were the stars of the game.  They dominated DEN front seven and “broke their will” in the second half.  In the run game they opened up massive holes and in pass blocking they took Miller, Chubb and Ray out of the game.  Special credit should be given to the TE’s and WR’s for their edge blocking as that sprung some of those long runs.  Spencer Long has to tighten up his shotgun snaps because there were at least three which messed up the timing of the play.

– Robby Anderson broke out in a huge way as he torched Bradley Roby for two (70+ and 30+ yards) long TD’s.  He still has to work on his routes but his speed is
special.  CB’s know Anderson goes vertical and they still can’t cover him.

– Great tandem game by Bilal Powell and Isaiah Crowell.  When you get 300+ yards on the ground you make it easy on your rookie QB.

– Shocking to say but a poor game by Quincy Enunwa as he had multiple drops.

– Nice to see a Terrelle Pryor sighting as he made an excellent catch on Sam Darnold’s final TD.

– Sam Darnold game was the exact opposite of Keenum’s.  His numbers weren’t pretty but when the game was up for grabs he made clutch plays.  On vertical routes which Darnold had struggled with he threw TD’s to Anderson which changed the momentum of the game. In addition Darnold showed his toughness as he ran 30+ yards down the field to throw a block on another long run by Powell.

Tell us what you think and see fan reaction in our NY Jets message board.