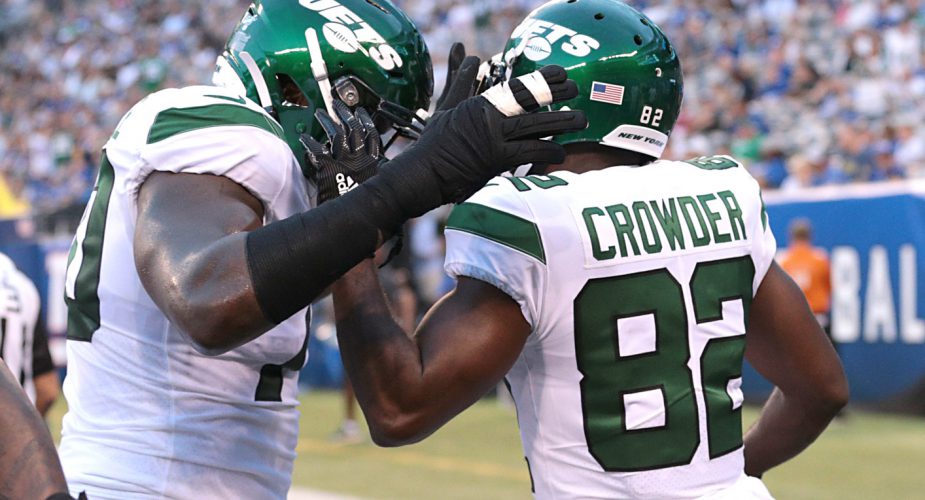 I had to be in the office early so I haven’t reviewed the tape yet so here are some game observations off the top of my head:

– The #1 offense showed what they’ve been doing in camp.  No huddle, uptempo pace allowed Sam Darnold and the offense to get rolling quickly.  Darnold’s ability to improvise really fits a no huddle offense, Adam Gase needs to implement it on a regular basis.

– If you blinked you missed the #1 defense.  They stuffed the run and allowed a 3 yard pass completion.

– The OLines provided a solid pocket for all the QB’s.  But there wasn’t much push in the run game after the starters went out.

– Trevor Siemian was an efficient “dink & dunker” but really didn’t do much. Nice play call by Gase on his TD pass to Elijah McGuire, faking the entire offense to the left and then spinning back “naked” to the right was creative. Fits perfectly with what Darnold can do, don’t be shocked to see that in the regular season.

– Good to see Gase be aggressive at the end of the half with three timeouts (shocking).  In addition he had an excellent pass interference challenge that picked up 30+ yards.

– After three years Davis Webb should be better, too many easy passes missed and throwing a “Sanchez pick 6” isn’t going to win a job.  Too inaccurate and mistake prone for my liking.

– Greg Dortch and Josh Bellamy had good games as WR’s.  Add in their special teams ability and they should be leaders for the #4 and #5 WR spots.  Dortch looks like a natural punt returner and that 30+ yarder was nice to see.

– Chandler Catanzaro was awful, there should be another kicker in camp before they have their next practice.  That is all.

– Trenton Cannon is going to have a hard time making the team as an RB.  But his ability as a gunner on special teams may save him.

– Bad technique by Derrick Jones on the long completion he gave up.  He reached and missed jamming the WR at the line and was beat.

– Active game by Frankie Luvu as he was all over the field making tackles and caused a fumble during his reps.

– Foley Fatukasi finally got some playing time and stuffed the run during his reps.  In addition he also showed a good ability to “time the snap” and be in the center’s lap.

Let us know what you think in our NY Jets Forum.