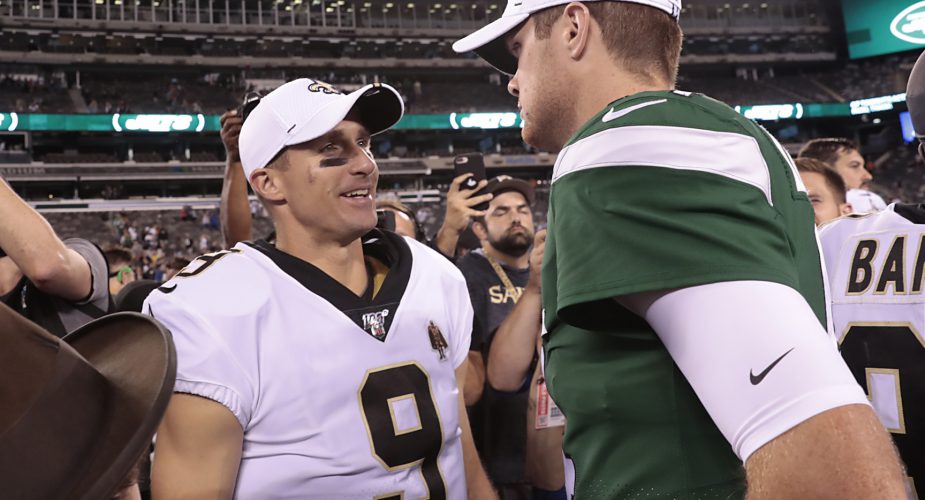 The Jets are not on the Saints level as a team and on initial watch this game “felt” like a mismatch.  But on review it wasn’t as bad as I thought, even though there’s still a ton to work on:

– A sloppy game which wasn’t helped by an officiating crew who must’ve been paid by the flag.

– NO first offensive series was a clinic by Brees, Kamara and Thomas as they marched down the field for a TD.  But for a crew who threw 30 flags, they missed an obvious offensive pass interference.  Neville Hewitt came up to cover Kamara on a wheel route and was blocked for an obvious penalty.  Nothing was called which led to a key 30+ yard gain on the drive.

– In Hewitt’s first start since replacing Avery Williamson, he showed good coverage as he stayed with Kamara on the previously mentioned play.  And then later broke up a TD on a Brees pass to their TE (Griffin?).

– Brian Poole had a good game in coverage and showed his physicality as he put a couple of big hits on NO receivers.  But he should’ve had an INT on the Brees to Thomas (20+ yard) throw on their TD drive.

– Still waiting on Quinnen Williams to get his first sack, but again he drew multiple holding penalties and had a couple of QB hits.

– Jordan Jenkins was very active off the edge and in NO backfield a number of times.  In the final year of his rookie deal can he build off of 2018 (7 sacks) and break out?

– Alex Brown built off his performance in the ATL game.  He was picked on multiple times but held up well in coverage.  He had multiple PBU’s, drew an offensive pass interference penalty and displayed his solid tackling skills.  Can he keep this up and increase the depth at the CB spot?

– For the first time the OLine struggled particularly up the middle, as there was way too many hits on Sam Darnold.

– Ty Montgomery’s fumble disrupted the flow of the offense as it prevented them from getting enough reps.  It took until the #1’s final drive of the night before they looked like they did in the NYG and ATL games.

– Good to see Darnold struggle early and recover before leaving the game. Think about how far the team has come at the position when the QB can be 8/13 for 97 yards and 1 TD yet he “struggled”.

– Good “building block” game for Robby Anderson.  As he continued to show diversity in his routes, beating Lattimore on an out.  And adjusting to a slight under throw on a vertical from Darnold (40+ yards).

– Taylor Bertolet keeps himself in the kicker discussion with a bounce back game.  Two FG’s from long distance (49 + 56) opened my eyes.

– Trenton Cannon probably had his best game from the line of scrimmage.  As he finally found holes and utilized his speed to break off a couple of nice runs.

– Finally Luke Falk has taken the #3 QB spot, what took so long?

Stop by our Jets forum and tell us your thoughts on the game.