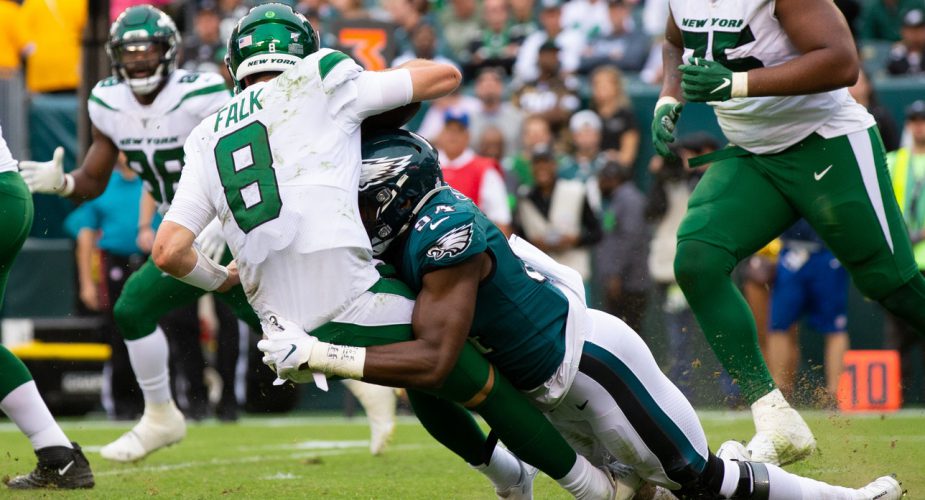 The New York Jets lost to the Philadelphia Eagles on Sunday by a score of 31 to 6. The loss drops the Jets to 0 and 4 on the season. Anyone who didn’t think this game was going to be a blowout was delusional. The day Sam Darnold was ruled out with mono this game was over.

The offense knows they can’t compete with Luke Falk as a starter.  And it showed in their body language, you didn’t see frustration you saw resignation with the numerous turnovers and three and outs.  A bit of credit to the defense for hanging in there and playing with emotion as they were constantly on the field.  Considering that the three turnovers led directly to 21 points they held PHI to 10 points, not bad:

– Nice to see Quinnen Williams back and making some plays.  He blew a layup sack as he whiffed on Wentz but at least he was in PHI backfield a number of times.  He has to build on this game, because by the end of the year he has to be a consistent DLine play maker.

– Why?  Because Leonard Williams is the “jaggiest of JAGs”.  Another game where his name was never called other than being hit with penalties.  What a HUGE disappointment.

– Why was Trumaine Johnson let out of the doghouse?  I would rather see if Nate Hairston can develop into something by the end of the year.  No more old high priced free agent CBs. Only CB’s 27 years old or younger from now.

– Neville Hewitt continues to step up in CJ Mosley’s absence.  Another 10 tackles, TFL and a QB hit in his reps.

– Brian Winters is bad, that is all.

– Chuma Edoga was spun around on way too many plays.

– Luke Falk is not an NFL QB at this point.  Holds the ball too long, below average arm strength and seems totally overwhelmed.  Other than that he’s terrific.

– LeVeon Bell is being wasted, his talents are still there and he show glimpses but he can’t overcome the dreck at OLine & QB.

If Sam Darnold isn’t cleared this week prepare for another dumpster fire against the Dallas Cowboys.