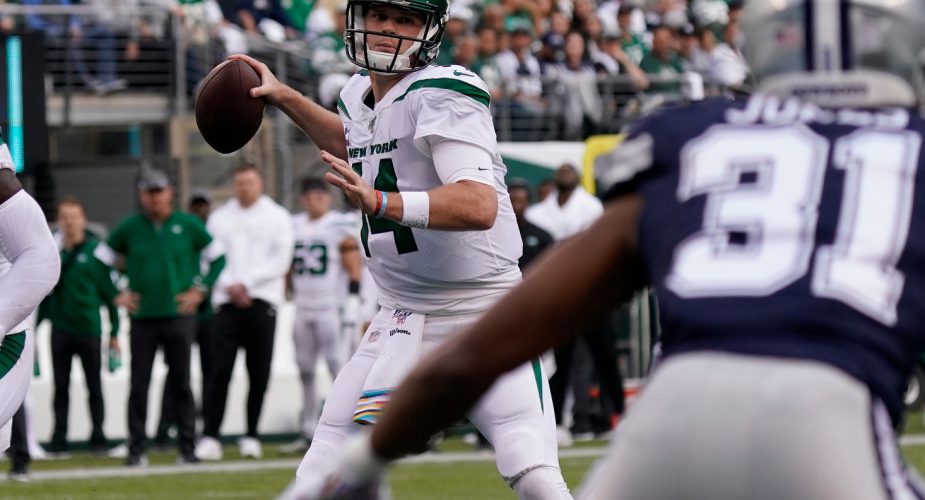 It took way too long but the Jets finally broke into the win column with a last second win over DAL.  And the whole reason was one player, Sam Darnold. Luke Falk is probably a nice guy but he’s a practice squad player who had no business being a starting QB.  There’s no comparison between Darnold and Falk and anyone who didn’t think there was going to be a big change in the offense was fooling themselves.  Let’s take a look:

– Lachlan Edwards was his consistent self and for once wasn’t on the field 10+ times (4 punts, 45 yard avg).

– Solid effort by Sam Ficken as he was 3 for 3 on PAT’s with a clutch 38 yard FG late to give the team a 24-16 lead.  He also displays excellent length on his kickoffs.

– Finally a pulse in the return game.  Vyncint Smith showed speed but more importantly a clue on what hole to hit on kick returns (24 yard avg).  And Braxton Berrios finally got out of “Jeremy Kerley mode” and returned a couple of punts (11 yard avg).  Not great but its a start.

– A bend but not break effort by the defense.  Considering that DAL was missing their two top WR’s and starting OT’s nothing to celebrate.  They were able to hold
DAL to FG’s, get a couple of key stops and break up the 2 point conversion.  One side note, the refs were absolutely pathetic on the final drive.  Some of those pass interference calls were horrible, particularly the one on Jamal Adams.

– The run defense wore down in the second half and Elliott broke off too many long runs.  The pass defense played too soft against pedestrian WR’s, with no Cooper or Cobb they needed to be more aggresive.  If Trumaine Johnson can’t check average WR’s its time to say goodbye.  When is Nate Hairston coming back?

– Probably the best game Jamal Adams and Marcus Maye played in tandem since being drafted.  Maye (5 tackles, 1 PD) was excellent in coverage and delivered big tackles. While Adams (9 tackles, 1 PD, 1 TFL) was all over the field in the run and pass game. And he was the key blitzer on the 2 point play which caused Prescott to rush his throw

– Jordan Jenkins had the team’s only sack and three QB hits.  If Joe Douglas can ever find a real edge rusher he would be a very solid secondary option.  He shows
a decent knack for getting after the QB.

– Amazing how improved an OLine can look when there’s a QB who knows what they’re doing playing behind them.  We’ll get to that when we talk about Darnold, but Chuma Edoga needs special recognition.  He was very shaky against PHI but he was outstanding against Demarcus Lawrence.  You never heard Lawrence name all game and he ended up with no sacks and no QB hits.  Tremendous growth by Edoga in one week.

* Tremendous command of the offense
* Accuracy
* Throwing with anticipation
* Pocket presence
* “Sixth sense” to feel pressure, slide away from it and deliver the ball from different angles

The defense no longer stacked the box with 8-9 players.  And Darnold’s quick release made the OLine look better.  Bad mistake on the INT he was trying to throw to Crowder because it cost the team at least 3 points.  The 92 yard TD to Anderson was pretty but what was special was what took place before the throw.  Darnold changed the formation by moving Crowder to the left side which left Anderson isolated 1 on 1 with the CB. Then on the snap Anderson blew by the CB with a double move.  DAL defense is stacked with a number of excellent players (Lawrence, Quinn, Lee, Smith, Vander Esch and Jones) and Darnold in his first game back sliced them up.  A very impressive performance.