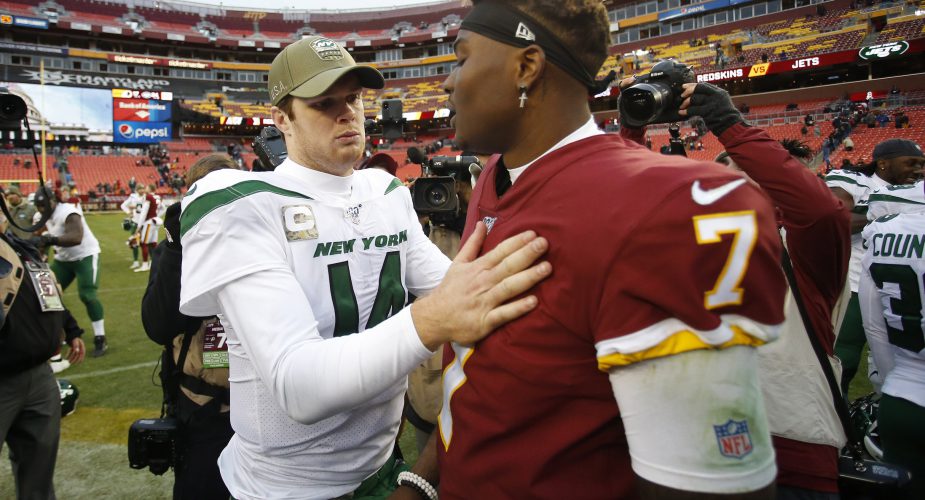 For the first time in over a year (10/7/18 and 10/14/18) the Jets actually won two games in a row.  Washington isn’t a good football team and they have an over matched rookie QB but who are the Jets to throw wins back.  The key points of this game were the offense generated 34 points for a second week in a row and the defense slapped Haskins around all day:

– Sam Ficken has opened the door to being replaced in 2020.  Granted his misses (XP and FG) didn’t affect the outcome of the game but he’s showing too much inconsistency.  At best he’s going to have to fight for his spot in camp next year.

– Lachlan Edwards has graduated from a boom/bust punter early in his career to a consistent “field changer”.  He had another solid day with a 42 yard average and one punt inside the 20 yard line.

– Horrid fumble by Vyncint Smith on his only kickoff return.  Fortunately for him Washington didn’t score on their possession.  Finally an impactful game by Braxton Berrios as he had a 14 yard average on four punt returns.

– Solid overall game by the defense as they stuffed the run and shut down WSH passing game.  From a “stat” perspective I’m sure they’re kicking themselves because of the meaningless numbers Haskins generated in the 4th quarter.

– Another impressive performance by Bless Austin as he built on his pro debut against NYG.  How refreshing to watch a CB that’s fast, has good
awareness, speed and is a willing tackler.  The total opposite of Trumaine Johnson, thank goodness.

– In addition to Austin these were the other defensive stars:

– I know its nitpicking but Marcus Maye has to make that INT.  He can’t let a “scrawny” WR pull the ball away from him

– Adam Gase deserves credit for his “first 15 plays”, as the offense has scored TD’s on their first drive in the past four games.  But unlike last week when the offense “blacked out” for two quarters the production stayed consistent.  In addition scoring 34 points in back to back weeks is impressive.  Getting Sam Darnold on the move by incorporating more roll outs was a nice touch.  That’s enough credit, now Gase has to keep it up

– The OLine was solid in both phases for once.  As they finally got over 100 yards on the ground (115) and allowed two sacks early on.  They also had to incorporate Brandon Shell back in at RT as Chuma Edoga went down with an injury.

– I’m starting to be concerned that LeVeon Bell and this run scheme don’t fit. Bilal Powell in his few reps (7 rushes / 42 yards) was much more explosive through
the holes being opened.  While Bell “eeked” his way to 59 yards on 18 rushes. Gase has to do a better job in utilizing Bell or bring in a run game coordinator.
Because right now he’s being wasted.

– I’m also concerned about Robby Anderson’s role in the offense.  Yes, he had a TD but that was his only catch of the day and it was for 6 yards.  I’m starting to wonder if he’s going to be re-signed.

– Ryan Griffin (5 recs / 109 yards / TD), Jamison Crowder (5 recs / 76 yards / TD) and Demaryius Thomas (4 recs / 44 yards) all seem to fit better with Darnold than
Anderson does.  They all run “dirty work” routes over the middle of the field where Anderson usually doesn’t.  Something to watch going forward.

– Awful INT by Sam Darnold as he went through at least 3 progressions on the play then still forced a throw into traffic.  It could’ve been a turning point in the game
but the defense held Washington to a field goal.  I know its strange to start the breakdown of Darnold’s day with his only mistake (19/30, 293 yards, 4 TD) but the second half of the season is all about his progression.  And proper decision making is critical in taking the next step as a QB.  Other than that he displayed his “off script” ability and accuracy on the run as there were more roll outs in the game plan.