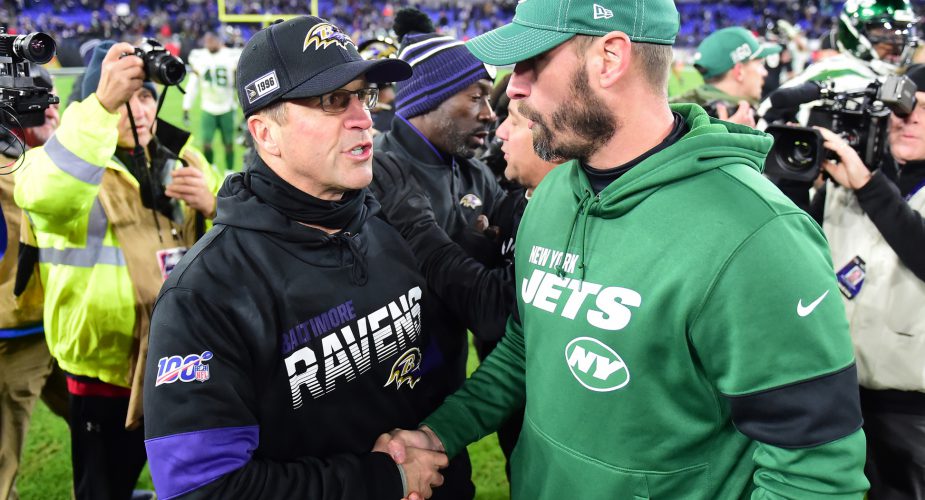 If you’re looking for the usual “the sky is falling”, “fire everybody” hot takes after a Jet loss you’re looking in the wrong place.  The Baltimore Ravens are the superior team and on their way to being the #1 seed in the AFC.  The Jets are not that. To me yesterday’s game was an opportunity to see if progress had been made since their last nationally televised game (New England) which was a disaster.  The final score (42-21) won’t show it but the Jets “punched above their weight” for 40 minutes before their roster issues (talent level), injuries and mistakes doomed them:

– For the first time since Mike Westhoff was in his prime the return game was fantastic.  Ty Montgomery (4 ret / 23 yd avg) and Vyncint Smith (3 ret / 28 yd avg) gouged BAL on every KO return.  And Braxton Berrios (3 ret / 16 yd avg) was excellent on punts as he didn’t pull a “Jeremy Kerley” and made the first tackler miss repeatedly.

– Great job by Tarell Basham on the punt block that led to a scoop & score by BJ Bello.

– Hopefully Sam Ficken enjoyed his time as “hero” after the Miami Dolphins game because he was back to being inconsistent.  Granted his miss on the 49 yarder was tipped but he missed another XP, which can’t happen.

– No love for the defense today.  Baltimore gouged them on their first three drives  of the game for 21 points.  Give them credit for stabilizing and stopping BAL on three drives that stretched from the end of the first half to the 3rd quarter which kept the game close.

– This game turned from the 9:40 mark in the second quarter until the 5:20 mark in the third quarter.  The score was 21-7 for that entire period but the offense had too many missed opportunities:

* A turnover on downs in the red zone, to me Peters held Robby Anderson but they didn’t call it.

* On the final drive of the half Jeff Smith beat the CB on a wheel route but slowed down as Sam Darnold rolled out, causing the throw to be 1-2 yards too long for a TD.

* On the same drive Darnold then throws an INT which takes points off the board.

* Finally, Darnold fumbles in the pocket setting BAL up to score again putting the game out of reach 28-7.

– Excellent job by the OLine as they held up against BAL blitzes and were able to open holes in the run game.  Nice wrinkle by Adam Gase to go with a “jumbo OLine” as he deployed Connor McDermott as an extra TE/OT.  It helped in keeping Darnold clean but it did take one eligible receiver out of the play.

– A solid effort by LeVeon Bell (21 car / 87 yds) as the rushing offense was able to chew up clock and keep BAL defense honest.

– Good games by the WR’s as they went up against a strong BAL secondary:

– Sam Darnold’s two turnovers cost the team 10-14 points.  His INT took at least a FG off the board and his fumble set BAL up for a TD.  Was the INT because of a miscommunication with Daniel Brown (instead of Ryan Griffin)?  And I was surprised by his fumble, he’s really cleaned that up since his USC days.  Now that we’ve dealt with his mistakes let’s give him credit for his improvement since the NE “ghost” game.  Darnold (18/32, 218 yds, 2 TD) was much more “settled” in the pocket as BAL brought pressure.  For the most part he was able to progress through his receivers, step into his throws and be fairly accurate.

The Jets are now 4-2 in the second half of the season with PIT and BUF remaining. Neither team is as good as BAL, let’s get some injured players back, continue to improve and finish the season strong.