Darnold in the Rain; Other KRL Game Notes 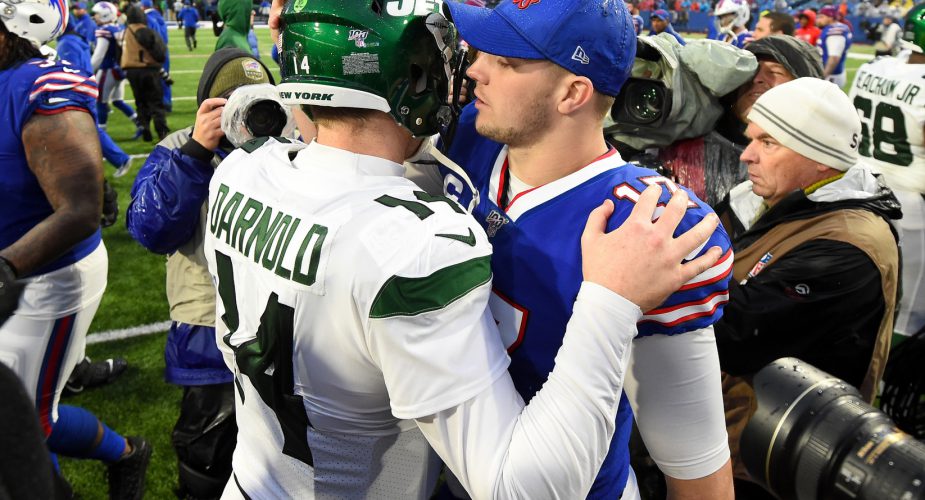 In a game that was extremely hard to watch and had a pre-season feel to it, the Jets ended the season with a 13-6 win over BUF.  A torrential downpour, odd play calls and some questionable plays that weren’t challenged highlighted an ugly game.  The Jets end the season with a 6-2 second half and now for the first time since taking the GM job in May, Joe Douglas can put his stamp on the team.  Can he and his staff properly construct a roster to end the playoff drought in 2020?  We’ll see, but before Douglas takes center stage let’s take a look at the last game:

– Nothing special in the return game from either Braxton Berrios or Vyncint Smith.

– Lachlan Edwards was mediocre as he had a 43 yard average on 5 punts.

– Sam Ficken was his usual inconsistent self as he was 2/4 on FG’s.  Let’s face it at best he gets an invite to camp next year and will have to battle for the spot.  He’s just not reliable at this point.

– Solid finish to the season by a unit that “punched above their weight” all year.  They held BUF backups to no TD’s and generated three turnovers which should’ve been four if not for an awful replay overturn.  Tarell Basham had a textbook strip sack of Matt Barkley that for some unknown reason was ruled an incomplete pass.

– Arthur Maulet had his best game as he finished with 7 tackles, 2 TFL, 1 PBU and an INT.  Credit to him for his improved tackling because he was a “whiffer” in earlier games.  I don’t know if he can be a starter going forward but at minimum he should be a depth CB.

– Steve McLendon (2 TFL) and Foley Fatukasi did an excellent job of timing BUF center’s snaps all game.  They had BUF snap counts timed so well that it seemed they were offsides multiple times but weren’t.  Totally destroyed BUF blocking schemes.

– James Burgess finished his season on a high note as he had his “usual” 9 tackles, TFL, PBU and an INT.  With CJ Mosley and Blake Cashman coming back next year you wonder where/how Gregg Williams will deploy him?

– Even though the refs “stole” a sack from him Tarell Basham still had an impact game with 2 tackles, 2 PBU, QB Hit and a fumble recovery.

– Free agent to be Jordan Jenkins finished with 3 tackles, 1 sack, 2 TFL, PBU, FF and a QB Hit.  Jenkins finished with a career high 8 sacks, he’s basically a 2019 version of Calvin Pace.  The key in the off-season is Joe Douglas needs to add a “twitchy” edge rusher opposite him to take
the unit to another level.

– Poor performance by the offense as they left at least 10 points on the field (2 missed FG and settling for a FG on an underthrown TD).  And Adam Gase had some odd decisions to say the least:

* Running the wildcat on 3rd and 2 on the first drive of the game with    LeVeon Bell for no yards.
* Not challenging the INT Sam Darnold threw.  BUF CB was “face guarding” Jamison Crowder and hit him just before he reached for the ball.
* The series after Jordan Jenkins forced a fumble, they ran twice into the middle for no yards then a pass for 5 yards then punted.  No change of possession “shot down the field”.

– Considering the OLine had to incorporate two new guards (Brent Qvale and Ben Braden) they did a decent job in pass protection.  But as usual they didn’t provide consistent holes in the run game.

– Awful job by Daniel Brown in pass protection.  Too many “whiffs” allowed too many hits on Sam Darnold.

– Jamison Crowder did his usual “chain moving” with 8 catches for 66 yards and the game’s only TD.

– I think this was the first time Sam Darnold played in the rain and he needs to learn from it.  Because he struggled with his accuracy as multiple times he came up short on throws that he usually makes in his sleep.  And he cost himself a TD on an underthrow to a wide open Daniel Brown.  Considering the downpour Darnold’s numbers were alright (23/36, 199 yards, 1 TD, 1 INT) but a glove on his throwing hand may be the way to go next time.