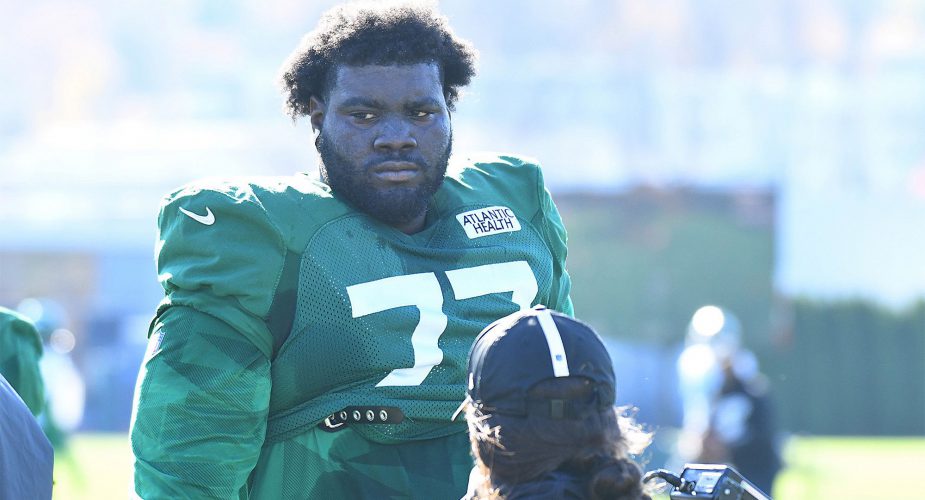 That was a close game but Jaguars fans got punched in the mouth as the Jets pulled out a last second loss to continue their quest to the #1 pick.  Let’s
take a look:

– It really stinks Mekhi Becton got hurt because he was putting on an absolute clinic at LT.  Totally sealing off that side in pass protection and throwing defenders around like ragdolls in the run game.  During the interviews for the next OC and OLine coach, if they don’t have a definitive plan on building their line schemes around Becton they better not be hired.

– Loving the growth I’m seeing out of Denzel Mims.  Nice production last night (4 recs / 62 yds) but what was really impressive was how physical he was fighting off CB’s to get in his routes.  Also doing it against a Belichick defense shouldn’t be dismissed.

– Nice game by Breshad Perriman (5 recs / 101 yds / 2 TD) but until proven otherwise its just a tease.  Great vertical speed and good deep ball tracking but what good is it if you’re never on the field.  I wouldn’t mind re-signing him to another one year contract and allow him to compete for a job.  But Joe Douglas needs to go big game shopping and look at Chris Godwin and Allen Robinson at WR in free agency.  This team needs a stable WR corps for the 2021 QB, because I don’t think its a coincidence that once Perriman, Mims & Crowder were on the field they had serious production (11 recs / 189 yds / 3 TD).

– If Sam Darnold is here next year I hope he was watching Joe Flacco on how he delivers deep balls to his WR’s.  Because they are a thing of beauty in terms of touch, loft and distance all things Darnold has struggled with.

– Props to Sergio Castillo in his fill in for Sam Ficken.  Will he be kept around for the next staff to evaluate?

– Nice to see the young secondary players on the field with Marcus Maye, let’s take a look:

* Bless Austin is an excellent tackler (12 Tkls) but I need better coverage.  I would gladly give up 7-8 of those tackles for 3-4 passes defensed.
* Bryce Hall got on the field and that was enough for his first game.
* Ashtyn Davis is starting to look comfortable and showing up (5 Tkls, PD).  Gregg Williams started to send him into the box and allow him to blitz.  He needs to work on his timing and strength but he would’ve had a sack if not for a roughing the passer call.

– Nice games from Foley Fatukasi (7 Tkls, TFL) and Tarrell Basham (2.5 TFL).  But Douglas MUST find at least two edge rushers in free agency and the draft.  It was embarrassing the lack of pressure generated, on some passes Williams sent 7-8 men and still didn’t get home.

– Massive credit to Brian Daboll (OC) up in Buffalo. The job he’s done with Allen’s development and hiding his flaws has been terrific.  He should be a top candidate on Douglas list once Gase is gone.

– And can the media stop with this stupid “Trevor Lawrence is going to stay in school” narrative. If he’s a “generational talent” then he should start his career as soon as possible.  Why? Because he needs to start the clock towards his second contract where he could get 45+ million a year if he reaches his ceiling.