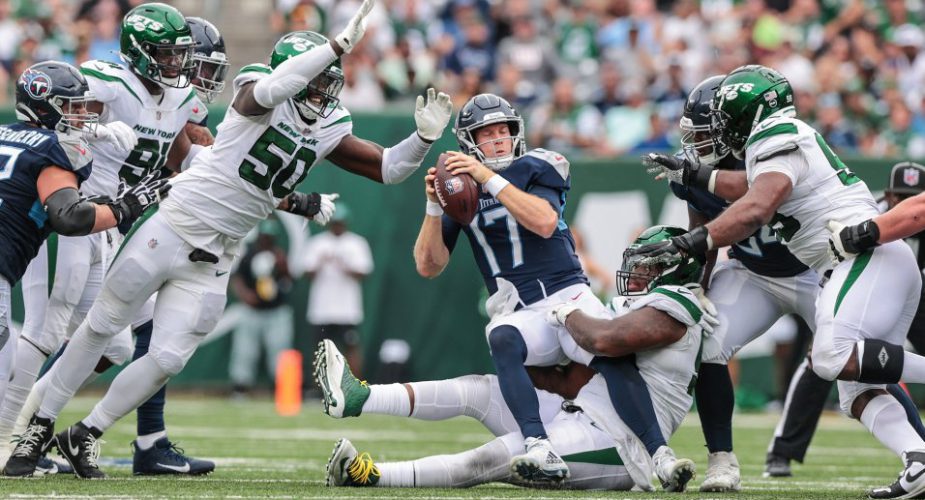 The way the New York Jets offense started out on Sunday, there’s no way I saw this coming.  But of course, in Jet fashion, Robert Saleh’s first win had to come on a missed FG on the final play of OT.  Multiple botched opportunities to close out the game made this a nail-biter, but beggars can’t be choosers.  For the first time all year it was fun to review the tape, let’s take a look:

– Matt Ammendola has been a solid find at kicker.  He was a perfect 2/2 in FG and 3/3 in XP.  And on kickoffs, he’s been a consistent touchback guy.

– Tom Morstead has been a solid pickup for the injured Braden Mann, averaging 46.2 yards on his punts.

– Braxton Berrios finally had an impactful game returning kicks.  As he averaged 16 yards on his punt returns and 24 yards on his kick-off returns.

– Let’s deal with the elephant in the room, the Jets caught a HUGE break with no Julio Jones and AJ Brown in the lineup.  The remaining TEN WRs were nothing to fear and the young secondary did a fine job keeping them under control.  Bryce Hall was the standout as he had 5 Tackles, .5 Sack, 3 Pass Defended, 2 QB Hits, and excellent timing on his blitzes.

Even though he didn’t produce big numbers (2 Tackles, QB Hit) special recognition needs to go to Sheldon Rankins.  He was creating so much disruption/penetration that his line
mates were able to “mop up” and get the stats off of his work.

– Normally I would rip the rush defense (37 rushes / 177 yards).  But with Derrick Henry, TEN OLine and their sledgehammer running game I’m pretty happy the defense kept them “under control”.  Finally, why TEN takes Henry off the field in any 3rd and short situation is beyond me.

– The worst aspect of the defensive performance was the screen game.  Jeremy McNichols was TEN leading receiver (8 rec / 74 yards) on nothing but screens.  Too many on 3rd and
longs when the defense could’ve gotten off the field.

– Absolute monster games by CJ Mosley and Quincy Williams at LB.  Covering sideline to sideline, taking on Henry in the running game, and getting into the backfield:
* Mosley had 14 Tackles, Sack, TFL, and a QB Hit.
* Williams had 12 Tackles, Sack, 2 TFL, QB Hit, and a Pass Defended.  If he keeps producing at this level he’ll be known for his game and not that he’s Quinnen’s brother. And to think he was a waiver pickup before the season began.

– I’m happy that the offense produced 27 points but as you break it down I’m still concerned. They didn’t run the ball effectively at all (25 rushes / 66 yards) and excluding the “splash” plays produced by Zach Wilson there was nothing they could rely on.

– Amazing to think that it took three full games and three quarters before this team held a lead.

– The OLine got no push in the run game but did a good job in keeping Wilson clean.

– Corey Davis had a good statistical game (4 rec / 111 yards / TD) but early on he had a bad drop and caused Wilson’s INT as he stumbled out of his break.  Hopefully the 50+ yard TD Davis pulled in late in the game will get him going.

– Props to Keelan Cole not just for a good stat game (3 rec / 92 yards) but he was the first WR to actually catch a Wilson “off script” throw.

– Welcome back Jamison Crowder as he provided Wilson with a reliable target (7 rec / 61 yards / TD).

But for all the “sexy” plays Wilson has to clean up the little things which would’ve ended the game in regulation or OT:
* With two minutes left in the fourth quarter he has to complete that pass to Davis to pick up the first down.
* And on the OT drive, he can’t “dirt” the ball to Ryan Griffin on what would’ve been a walk-in TD.

Now off to London to play ATL which lost a tough game to WSH, can this team clean things up and get another win?