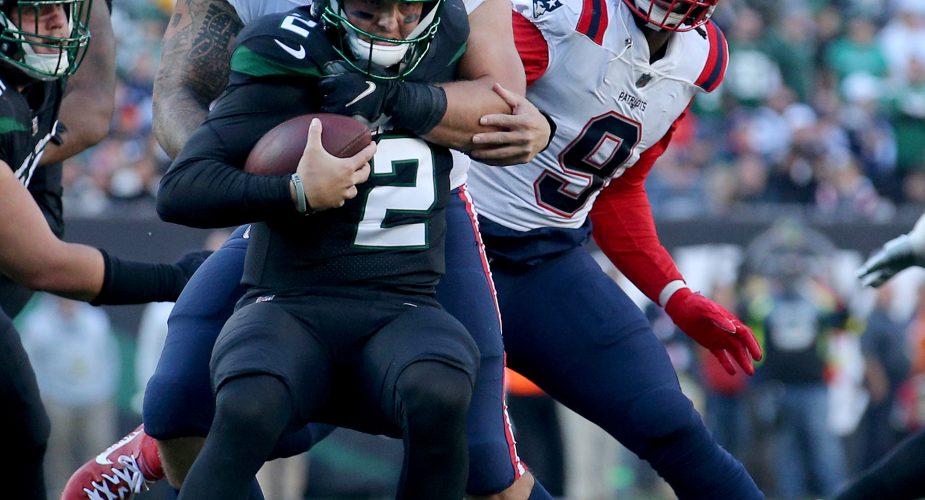 The New York Jets fall to 5-3 after an embarrassing loss to the Patriots. After what looked like a promising start for Zach Wilson, it took a hard turn after his first of 3 turnovers this afternoon. He was never able to settle himself, allowing a snowball of bad decisions to wipe away an early 7-point lead. The team was never able to recover from there. Despite their last minute surge, they were ultimately unable to overcome the hole dug by their 2nd-year signal caller, falling by a score of 22-17.

When assessing Wilson’s performance (without looking back at the film), it was probably one of his worst games as a pro. He finished the day 20-of-41 for 355 yards (career-high) with 2 touchdowns and 3 interceptions. While the box score may suggest he had a good, even great day, that is not close to being the case. While Wilson was able to find his open targets on occasion, his overall decision-making combined with his inability to “kill” a play and move on allowed New England to feast on their mistakes. One bright spot, if you’re the type to look for those in a loss like this, his first touchdown pass to Tyler Conklin was one of Zach’s best throws all season. Timing, anticipation and accuracy to put the ball where only his tight end could get it, all on display during that one pass.

Elsewhere on offense, 2 pass-catchers had 6+ receptions (Tyler Conklin and Garrett Wilson) and three had 75+ yards receiving (Conklin, Wilson, Denzel Mims), and Elijah Moore saw 0 catches on a sole target on 10 snaps. When asked about his chemistry with Zach Wilson, Moore replied “I don’t know, I don’t get the ball”, a clear sign he remains frustrated with his usage. Head coach Robert Saleh said the plan was to get Garrett Wilson on the field more for this matchup. The run game was abandoned too quickly by the Jets’ offense, resulting in 14 carries for 49 yards by their 3 backs. Having a run/pass split of 43/14 in a one-score ball game is not the recipe for success against a team allowing 136 yards per game on the ground.

New York’s defense, however, showed up early and often in this game, totaling six sacks on quarterback Mac Jones. The unit also added 13 TFLs and 8 QB hits, so they certainly did their part throughout this game. While everything was not perfect, Jeff Ulbrich and this defense were not to blame for the loss. John Franklin-Myers did make another boneheaded mistake, roughing the passer penalty on a would-be Michael Carter II pick-six that would’ve put the Jets up 17-3. Carter II was able to come down with an interception on the 3rd drive of the game, after Bryce Huff forced a wobbly pass up in the air by Jones. Instead, the Patriots were able to steal 3 points to close the lead to 10-6 before the half. A couple of second half drives where the Patriots had a short field put the defense in a bind, surrendering 13 points in the 3rd quarter.

Overall, the Jets were essentially one position (quarterback) and one penalty away from running away with this game. New York trusted Wilson with the ball in his hands 40+ times, and the results show for that. The team now looks ahead to another divisional matchup against the Buffalo Bills, one where every player will have to play their best game of the season.