The Pride And The Pressure 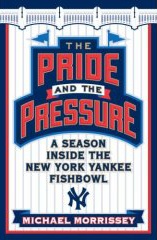 JetNation had the opportunity to interview Michael Morrissey from the NY Post.Â  His recently released book, “The Pride and the Pressure“Â captures the essence of what itâ€™s really like to be a Yankee in the present day, dissecting the most renowned, successful sports team in a comprehensive and riveting fashion. For all of the devotion spent on the Yankees in newspapers, magazines and books, never before in this era has someone attempted a definitive look at the truly unique triumphs and travails that come with wearing pinstripes.

The book details the efforts GM Brian Cashman made in prioritizing a new Yankee philosophy to counteract the mistakes of the post-championship drought years. It explains the physical decline of George Steinbrenner, perhaps the most important owner ever in the history of North American team sports. It analyzes Carl Pavanoâ€™s clubhouse status and the dynamic between Alex Rodriguez and Derek Jeter, and it takes readers on the wild roller coaster through the 2006 season, which ultimately ended in disappointment.

JetNation:Â  In the Pride and the Pressure you talk about what it was like to be a New York Yankee in 2006.Â  Their failure in the postseason can be attributed to untimely pitching, murderers row falling asleep or one of many clubhouse rifts.Â  What do you think was the reason they made such a quick postseason exit in 2006?

Michael Morrissey: I believe a number of factors led to their ignominious postseason defeat. Joe Torreâ€™s demotion of Alex Rodriguez and the unnecessary lineup shuffling was certainly a main cause, as A-Rod faced unnecessary scrutiny and the Yankees unsuccessfully tried to shoehorn too many stars into a lineup at the expense of chemistry and flow. Ultimately, though, bad pitching performances were as important. Mike Mussina couldnâ€™t bring home a two-run lead in Game 2, and Randy Johnson and Jaret Wright were useless in Game 3 and Game 4. Meanwhile, a lineup designated to beat any pitcher was helpless against all of them. For Yankee fans, it mustâ€™ve been infuriating to see the team dismantled by a far more inexperienced, if not inferior, squad.

JetNation:Â  Brian Cashman really seems to be in control of the organization now.Â  The influx of young arms is a prime example.Â  At any point over the past few years was Cashman’s job in serious jeopardy?Â  If so, what saved him?

Michael Morrissey:Â  Iâ€™m not sure Cashmanâ€™s job was ever in serious jeopardy, as Steinbrenner always seemed to come to his senses over the years after putting the GM in the doghouse. Certainly, there were (and are) other power-brokers in the organization who have tried to minimize Cashmanâ€™s influence, but thatâ€™s been nullified since the GM signed his new contract and was given The Bossâ€™ guarantee that he has ultimate decision-making power over all of the baseball operations. As he gets older, Steinbrenner seems more apt to trust Cashman.

JetNation:Â  If 2007 ends up being Joe Torre’s last year as Manager, who would the Yankees name as his replacement?Â  Joe Girardi and Don Mattingly seem to be the overwhelming favorites.Â  Who would make this decision?Â  George or Cashman?

Michael Morrissey:Â  The early money is on Don Mattingly taking over in 2008 if Joe Torre is not retained, and itâ€™s my feeling Torre needs to take the team deep into the playoffs to return. Mattingly is more of a calming influence, although Girardi has already proven he can win. Girardi did an excellent job in Florida under the circumstances. Itâ€™s too early to tell, but Cashman will put his preference through to the Boss, and if itâ€™s a strong argument, my feeling is it would be approved.

JetNation:Â  By all accounts ARod struggled in 2006.Â  Yet he managed to hit .290, drive in 121 runs and belted 35 home runs.Â  He will hit his 500th career home run at the ripe old age of 32.Â Â  SomehowÂ  his future as a New York Yankee seems to be back page headlines a few days each week.Â  He batted 8th in the postseason in 2006, will that cause problems this year or has he truly moved past it?Â

Michael Morrissey:Â  Iâ€™m not sure you ever move past a humiliation like that, as A-Rod said reportedly called the demotion â€œthe worst thing everâ€? on the radio last week. There probably was some trust lost between player and manager, and I donâ€™t know if that will ever be restored. That said, heâ€™s focusing on having a monster year for two reasons: A) He wants to win his first world championship; B) He wants to maximize his salary for the future. Most people believe heâ€™ll use his opt-out clause after the season.

Thereâ€™s nothing the Yankees can do at this juncture to minimize the situation. It will be a gigantic issue as soon as the postseason ends. Derek Jeterâ€™s opportunity to help Rodriguez came and went last summer, when the Captain was silent throughout his former good buddyâ€™s struggles. To really understand this issue, I encourage readers to pick up “The Pride and the Pressure” and pay particular attention to the chapter on Jeter and A-Rod.

Also it seems as if his contract will remain a distraction all year.Â  ARod can void the remaining years after this season and in doing so he will create a P.R. nightmare in New York.Â Â  Is there anything the Yankees can do to minimize this potential distraction (short of extending his contract now)?Â  Do you feel that Derek Jeter needs to do something publicly to diffuse this situation?

JetNation:Â  You have been covering Major League Baseball for the past 10 years.Â  What team did you enjoy working with the most?Â  What team gave you the hardest time?

Michael Morrissey:Â  I enjoyed covering Jerry Manuelâ€™s teams with the White Sox in the late 1990s and 2000. I always thought Manuel epitomized class, and I sincerely hopes he gets another chance to manage somewhere. By contrast, former White Sox manager Terry Bevington was a buffoon and a bully. On a personal level, I enjoyed covering the 2004 World Series, as my father remains a diehard Red Sox fan. The 2005 World Series was also wonderful because of the good people I knew in the White Sox organization.

Covering the Mets beat for two last-place years in 2002 and 2003 was a struggle, although I enjoyed many of the people I interacted with, including Mike Piazza. I remember the Orioles of the late 1990s to be a particularly disagreeable bunch.

JetNation:Â  The Yankees have taken a slightly different approach with Phil Hughes.Â  Limiting his work last season and setting a goal of 180 innings for him this season.Â  With so many talented young arms on the horizon are Torre and Guidry ready to deal with young pitchers?Â  In recent years Torre leaned on Mel and always had a veteran pitching staff.Â  Is Joe even equipped to manage a staff of young hurlers?

Michael Morrissey:Â  Iâ€™m sure Phil Hughes will be babied a bit if and when he makes the majors. Yankee fans can relate it to the way Chien-Ming Wang was handled delicately following his shoulder problem in 2005. I donâ€™t think this will be a major issue.

That said, as I wrote in the book, one of Joe Torreâ€™s weaknesses is in leaning too much on his pitchers, specifically his relievers. Really, though, itâ€™s a universal problem throughout Major League Baseball, as starters go fewer and fewer innings every year. Still, the first half/second half splits of some of the recent Yankee setup men are downright scary, as I detail in the book.

Thanks so much for the opportunity, Phil, and I hope all your readers out there pick up and enjoy “The Pride and the Pressure.”

You can discuss this book here.

Wake Up The Ghosts: Yankee Preview

How to Fix the Yankees

Waiver Pickups For The Week (Baseball)