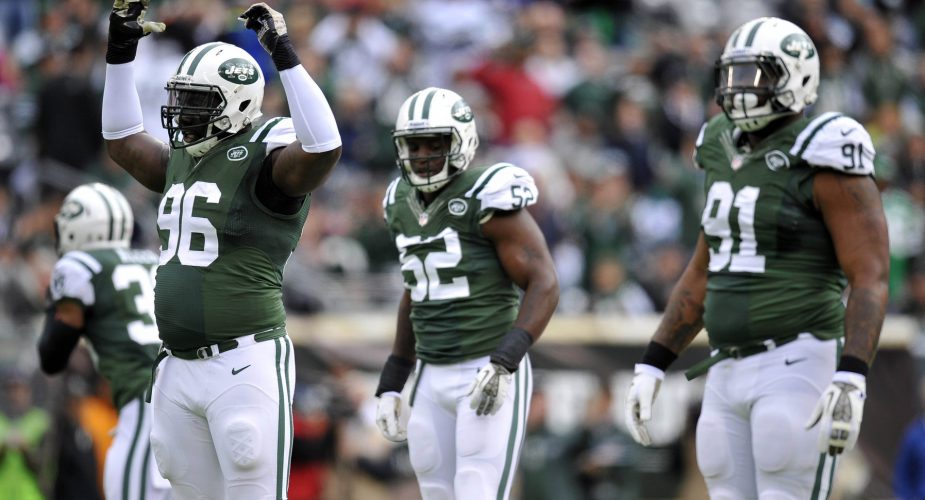 Before halftime, Mark Sanchez is a jittery, tentative, mistake-prone quarterback. He leads his team on 90 yard scoring drives, only to throw interceptions into triple coverage, bobbles and fumbles shotgun snaps, and can’t deliver when it matters.

In the locker room at halftime, his twin brother, also named Mark Sanchez, knocks him out, steals his uniform and takes the field as an imposter. This Mark Sanchez is steady and consistent, leads crisp drives down the field and almost always comes through in the clutch.

Let’s allow his twin to play both halves next week.

The Jets ran all over the Bills in week 9. With four backs contributing, you have to love their depth at the position moving forward – especially considering the fact that rookie back Bilal Powell has yet to see the field. Greene has been running with authority of late, putting up 70 or more yards consistently. With his hall of fame credentials and passion for the game, Tomlinson remains effective, despite his age. Joe McKnight is getting involved on all sides of the ball. John Conner is running well inside the tackles, and should continue to contribute to the power running game.

For the 2nd straight week, Burress was a major contributor. Both Burress and Holmes are capable of making circus catches that make Sanchez look better than he is. Kerley has been moving the chains of late, giving you the types of performances you love to see from a slot receiver.

Keller was a major part of the gameplan for the first time in awhile, and had great success throughout the game. That said, Dustin, everyone would appreciate it if you stop using that dumb flip move that you use to get that last quarter of a yard. It’s never worth an injury.

Though his contributions were welcome in the running game last week, tight end Matt Mulligan has to avoid costly penalties.

Wayne Hunter is still struggling at right tackle. Fortunately, it looks like Nick Mangold has finally gotten back to form after an injury against Jacksonville earlier this year. The Jets are moving the ball on the ground now. Give it a week or two and the offensive line should hit it’s full stride and remind us just how talented it truly is – it’s already showing flashes.

The Jets didn’t register a sack today, but they the defensive line provided enough pressure to keep Fitzpatrick under 50% in completion percentage. In the absence of the Jets best lineman, Mike DeVito, and with rookie Kenrick Ellis injured as well, they did an admirable job in holding Fred Jackson to just 82 yards on the ground. Jackson has been a dynamic force on the Bills this season, yet he had to rely on “garbage time” to acquire many of those yards.
Though they lack a superstar at this level of the defense, the Jets are proving that they have tremendous depth here. So long as they can recover from their injuries, the franchise has no less than 7 defensive lineman that they can use in a rotation if they so choose: DeVito, Pouha, Wilkerson, Ellis, Dixon, Pitoitua and Tevesau.

To repeat: no sacks, but the pressure was there. Plus, holding down Fred Jackson was no easy task. Pace and Harris posted interceptions.

Ryan Fitzpatrick hit less than half of his passes. He’s not nearly as bad as the Jets made him look in week 9. Even with the return of Nelson, a major weapon for the Bills – they simply couldn’t move the ball when it mattered. Kyle Wilson is living up to expectations as the nickel corner. Cromartie had a great game. The Jets have the best secondary in football, period.

Folk missed his first field goal of the season, but was 2/3 on his other attempts including a 50 yard shot. In a season of ups and downs, he’s been impressively consistent. Conley pinned the Bills on their own 1 with a punt. McKnight had another big time kick return. Kerley has been an erratic punt returner thusfar, but at times he’s truly impressive.

Rex Ryan and staff have taken the heat all season from the media, and that continued this week. Rich Cimini predictably complained about Rex’s decision to give the team 6 days off during the bye week, and others were worried that the Jets would overlook the Bills because they have the Patriots coming up next week. The defense played excellently throughout the game, and though the offense struggled out of the gate, they made the proper adjustments at halftime and proceeded to dominate the 3rd quarter.

If the coaching staff is going to be subject to all this media scrutiny, it only stands to reason that they be given proper credit when their team crushes a quality team on the road, especially when that team is a major rival for control of the division.