Bilal Powell to Stay With Jets 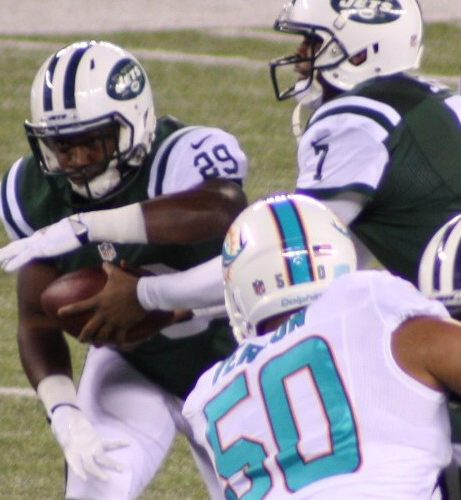 The New York Jets and running back Bilal Powell have agreed to a new contract that keeps Powell in green and white heading in to 2015 as a part of Chan Gailey’s offense.

With Rex Ryan taking over in Buffalo, some speculation had Powell heading to the Jets’ AFC East rival to reunite with his former head coach.  Had that happened, it would have been somewhat of a puzzling decision as Powell was vastly under-utilized during Ryan’s tenure.  In 2014, Powell saw his rushing attempts plummet from 176 in 2013, to just 33 this year.

A former fourth round selection out of Louisville, Powell is a fundamentally sound player who has performed well when called upon, but his opportunities have been few and far between.  The 5′ 10” 210 lb Powell carried the ball a combined 286 times between 2012 and 2013, racking up 1,134 yds (4.0 YPC) and five touchdowns.

As a four-year pro, Powell has extraordinarily low mileage as he’s amassed only 332 attempts after a relatively low number of carries at the collegiate level having run the ball just 436 times in four seasons at Louisville.

Powell’s lacks the game-breaking speed that teams covet, but he does an excellent job in pass protection and can also be utilized as a pass catcher out of the backfield.

Having as many needs as they do, this was a smart move by Mike Maccagnan and the Jets.  Powell fills another hole on the depth chart and allows the Jets to start free agency with one less gap on the roster.

The news was first reported by the New York Daily News’ Manish Mehta.