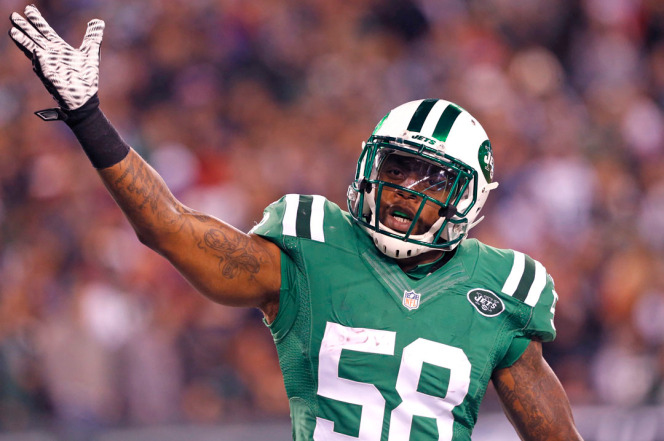 Last season the Jets took a chance signing middle linebacker Erin Henderson, who had sat out the entire 2014 season due to off-the-field issues. Henderson was a starter for the Minnesota Vikings before two separate arrests related to alcohol that led to him being released from the team. After spending the 2014 season in rehab, the Jets offered him a one-year prove-it contract for the veterans’ minimum ($745,000). Henderson didn’t disappoint having a solid season in 2015 with 45 combined tackles and two forced fumbles. As the season went on Henderson began to get more reps, and his role with the defense grew from a backup into a rotational player. After the Jets lost Demario Davis to the Cleveland Browns, re-signing Henderson became a real priority. There were rumors that the Jets were fighting with the Oakland Raiders to retain Henderson. The Jets were able to bring him back on a two-year $3.1 million contract with incentives that could bring it up to a $5 million deal. Entering his eighth season, Henderson has experience as a starter and is the favorite to start alongside David Harris. Throughout his career, Henderson has 333 combined tackles, eight-and-a-half sacks, eight forced fumbles, two interceptions, 23 run stuffs, and nine passes defended.

There has been speculation for a while now that the Jets would restructure some of the contracts on the offensive line. Interestingly though, it wasn’t who many thought the Jets would target for a restructured contract. All signs pointed to D’Brickashaw Ferguson and Breno Giacomini as candidates, particularly Ferguson who has a staggering $14.1 million cap charge for the 2016 season. Carpenter had a solid debut for the Jets last season starting all 16 games. The Jets created $2.46 million in cap space by converting $3.69 million of his $4.45 million base salary into a signing bonus which lowered his base salary to $760,000. While this helps free up some money for the 2016 season, Carpenter’s cap charge increases by $1.23 million in 2017 and 2018. The Jets still haven’t announced the signing of defensive end Jarvis Jenkins although the two sides have agreed to terms on a two-year $7 million contract. According to overthecap.com, the Jets are a hair over $3 million in cap space. The Jets will have to make a few more moves if they intend to re-sign free agent Ryan Fitzpatrick.

General manager Mike Maccagnan signed a familiar face last Friday with the addition of cornerback Darryl Morris. Morris spent the past two seasons with the Houston Texans, including 2014 while Maccagnan was a scouting executive with the team. Morris is a nice depth signing, but his main contributions will likely be on special teams. The Jets will need all the help they can get to improve a sub-par special teams unit from last season. Morris will be able to contribute on the defense as a rotational player, he has experience playing both in the slot and outside. Morris’ best season was in 2014 when he recorded 31 combined tackles, an interception, a run stuff, and seven passes defended. With the addition of Morris, the Jets get even deeper at the cornerback position. After the departure of Antonio Cromartie, the starting position opposite Darrelle Revis is up for grabs and coach Todd Bowles said there will be ‘competition’ for the spot. It will be interesting to see whether or not Buster Skrine, who normally plays in the slot, will get the nod or if someone else in the group will earn the spot. As of right now the Jets cornerbacks include: Darrelle Revis, Buster Skrine, Marcus Williams, Dee Milliner, Dexter McDougle, Kevin Short, and Darryl Morris.

The annual NFL owners meeting was held in Boca Raton, Florida and ended with a few interesting changes to the rules. The biggest and possibly most controversial change was the decision to move the touchback on a kick return up to the 25-yard line instead of the 20-yard line. Two other significant changes were the approval of an automatic ejection of a player who commits two unsportsmanlike conduct penalties, and making all chop blocks illegal. Owner Woody Johnson spoke to the media giving his endorsement for a Ryan Fitzpatrick return saying “come back to the Jets.” Johnson also mentioned that the Jets “could have drafted Russell Wilson,” obviously lamenting the quarterback struggles the Jets have gone through. Johnson was also asked about Muhammad Wilkerson’s contract situation, Johnson said “He’s been franchised, so as far as I’m concerned, he’s on the team right now. He’s on it. He’s a great player. Love to have him. He had a great year last year, 12 sacks. That little break he’s recovering from, from what I’ve been told, he’s recovering well from. So, yeah, if he’s in, I’m not going to be disappointed at all.” It doesn’t sound like Johnson is exactly thrilled with the situation. Head coach Todd Bowles also spoke to the media at the owners meeting. Regarding Brandon Marshall’s push for the return of Ryan Fitzpatrick, Bowles said “My sons wants certain things, too, that his dad says no to. It really doesn’t matter. I love Brandon to death and he’s a good player. That’s all I can tell you. He doesn’t make the decisions for this team.”