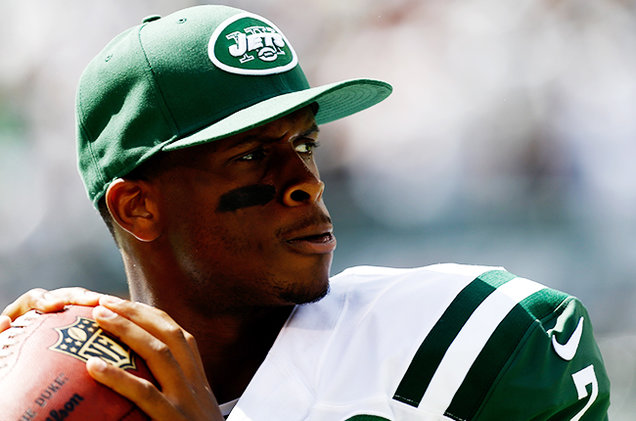 In any other sport when I watch during pre-season I never go “crazy”, but when it comes to football I always have to catch myself before I start screaming at the TV. I wonder why that is?  After watching the game again there’s a ton to clean up.  Bowles is probably going to turn the heat up this week in practice:

– So far so good with Lachlan Edwards and the punt coverage.  Every punt had good distance, hang time and “flipped” the field.

– Unfortunately we had nothing in the return game due to touchbacks and good WAS coverage.

– Ross Martin may be a good kicker in the future but he’s not ready yet.

– Third down efficiency has to increase, too many third and longs are being converted.

– It’s good that the defense is “bending” and not giving up points.  But I’m tired of seeing the opponent march down the field for 7-8 minutes at a time.

– Bad games from Marcus Williams and Erin Henderson.  Williams was soft in coverage giving up completions and Henderson vacated his lane a few times allowing a couple of big runs.

– Jordan Jenkins had a rookie up & down game.  He had two QB hits (which were almost sacks) but he badly whiffed on a clean sack of McCoy.

– Lorenzo Mauldin needs to get better cleats or improve his balance.  Because multiple times he was closing in on the QB off the edge and he ended up on the ground.  He also lost containment on a couple of runs.

– Good games from Rontez Miles & Ronald Martin.  Both patrolled the middle of the field and made multiple tackles at the line of scrimmage.  In addition Martin showed good range knocking passes away on sideline patterns.

– Even though Juston Burris gave up two TD’s (which he had good coverage on) he had some impressive PBU’s.

– Is Leonard Williams going to average a sack a game for the year?

– Horrible drops which led to multiple three and outs and prevented the offense from developing any kind of flow.

– Zach Sudfeld made a nice TD catch, other than that the TE’s were awful in their ball security.  Kellen Davis and Sudfeld have no excuse for allowing DB’s to knock the ball out.  And Jace Amaro had multiple brutal drops that killed drives.

– When Bilal Powell was at RB the running game looked good.  When Tommy Bohanon and Julian Howsare took over our running game disappeared, enough said.

– Considering Mangold sat out the OLine was solid.  Ben Ijalana & Brent Qvale alternated at RT and both were not noticeable (which is what you want).

– Jalin Marshall had a down game with multiple drops, he needs to bounce back next week.

– Charone Peake also had a couple of drops but fought through and made some plays.

– Robby Anderson was the big standout and it was good to see him high point the ball and take it away from CB’s.  Has he moved up in the WR pecking order?

– Shocked at how poorly Geno Smith performed.  Playing against #2’s you can’t be inaccurate and short hopping balls.  In my eyes the #2 spot is now up for grabs between him and Bryce Petty.

– Petty had a good game and continues to grow.  He showed good mobility in the pocket and was able to make plays when the protection broke down.