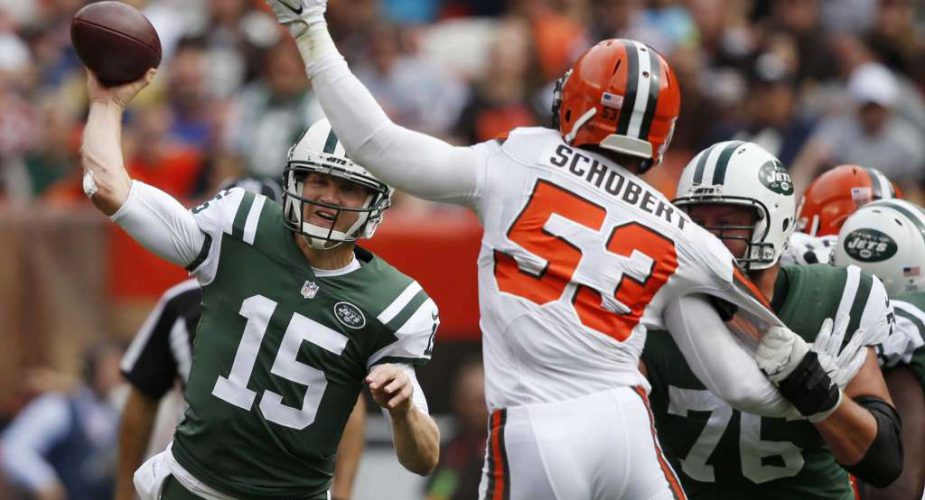 After an ugly start, Josh McCown got the Jets’ offense on track for the end of the third, and the fourth quarter. After being gifted an interception, the offense got the ball on Cleveland’s 13 and McCown capitalized with a two yard touchdown to Austin Seferian-Jenkins. Then after a fourth down stop on their own three yard line, McCown drove the offense 97 yards to take a 17-7 lead. There have been some hiccups and miscues, but McCown has done an impressive job leading a young and unheralded offense. McCown will have to be firing on all cylinders out of the gate next week if the Jets want to have a chance against New England.

After rushing for 256 yards last week, the Jets managed only 34 yards. The Jets abandoned the run game after getting nothing going in the first quarter. The Browns were constantly stacking the box, forcing McCown to throw on nearly every play. Even towards the end of the game, the Jets could get nothing going on the ground. The Jets also lost Bilal Powell to a calf injury, he didn’t return to the game.

The wide receivers didn’t do Josh McCown any favors by struggling to get open early on, but they gained more separation as the game went on. To be fair, McCown had little time to throw in the first half. Austin Seferian-Jenkins was consistent throughout the game, making multiple clutch catches after an early drop. Jeremy Kerley has been targeted 17 times this season, and has 17 receptions. That’s consistency right there.

The offensive line was pathetic in the first half, allowing Myles Garrett to go unblocked up the middle and get a sack on his first play this season and another not long after. The protection in the pass game, and the blocking in the run game were really bad in the first half. The second half was a different story, McCown had more time in the pocket, allowing receivers to get open. The Jets barely ran the ball until they were trying to run clock in the fourth quarter. Penalties were also a problem once again. The offensive line needs more consistency.

What is going on with Leonard Williams and Muhammad Wilkerson? The defensive line has zero sacks through five games. The front seven did a decent job stopping the run, and getting some hits on Kevin Hogan/DeShone Kizer, but the lack of sacks and the amount of time it’s taking to get into the backfield is troubling.

The secondary bent, but didn’t break. They also had two crucial interceptions that turned the tide of the game. Marcus Maye recorded his first career interception to prevent Cleveland from scoring, while Morris Claiborne recorded an interception in the third quarter to set up the Jets’ first touchdown of the game. Jamal Adams struggled with tackling again today, and Marcus Williams was getting picked on today by Kevin Hogan.

Chandler Catanzaro nailed a 57-yard field goal to give the Jets the lead going into half time. Catanzaro has been clutch so far for the Jets, hitting 9 out of 11 field goal attempts this season. Lachlan Edwards was consistent this week, helping the Jets struggling offense by averaging 52 yards on his punts, with a long of 62. The special teams unit has been surprisingly good this season.

Todd Bowles had a good challenge early on, overturning an obvious incomplete pass. Offensive coordinator John Morton also made some good adjustments coming into the second half after a terrible first half. Bowles is showing that he does in fact have command over the locker room, this is a scrappy and motivated team.