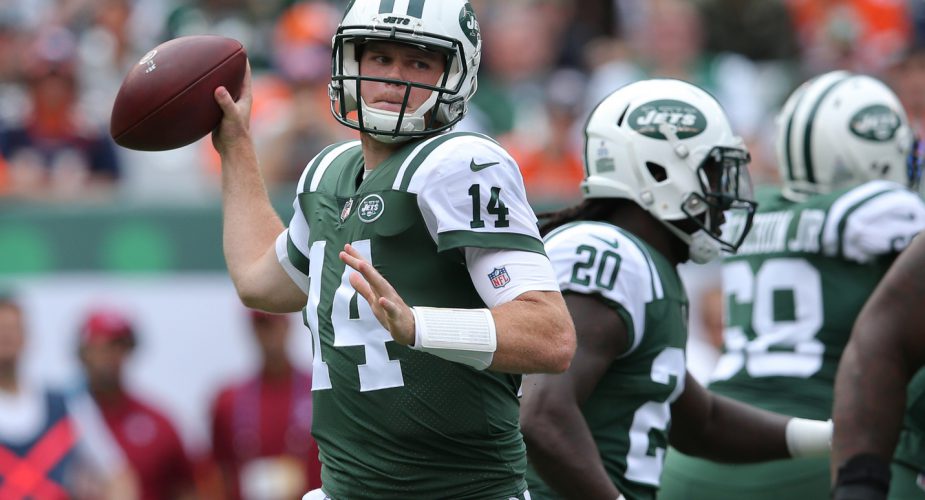 Thanks largely in part to poor coaching on the part of Todd Bowles and company, the Jets dropped a 29-22 contest to the Houston Texans despite Sam Darnold playing what was easily his best game as a pro up to this point.  After staking Gang Green to a lead with five minutes to go in the fourth quarter, the Jets defense couldn’t hold on and allowed the Texans to score the game winning touchdown with just under three minutes remaining in the game.  How’d everyone grade out?  Let’s take a look.

Rookie quarterback Sam Darnold played his best game as a pro.  Despite facing consistent pressure from one of the best defensive fronts on the NFL, Darnold looked composed and made several excellent throws on the move while keeping his eyes downfield.  He showed good touch on a few balls that were dropped over defenders and made several plays with his legs.  Darnold handed the lead to his defense with five minutes to go but they couldn’t hold on.

As has usually been the case with this group, they’re tough to grade because the run blocking hasn’t been there for much of the season.  With little room to work with, Elijah McGuire and Trenton Cannon struggled, putting up just 55 yards on 25 carries, but McGuire did find the end zone to take the lead late in the game after a big fumble early on.  The pair also managed to catch six passes for 53 yards.

Robby Anderson’s inability to hold on to the ball on the Jets’ drive immediately following the Texans go-ahead score was a killer, but the speedy receiver managed to have a big day all around (7 catches, 96 yards, 1 TD).  Anderson continued to show he’s expanding his route tree, catching passes on a hitch, a dig, a post and a comeback while hauling in a touchdown for the second straight week.  Jermaine Kearse failed to adjust to a ball deep down the middle on the Jets final drive that prevented a big play to get things going.  Andre Roberts scored his first touchdown of the season as a receiver.

We’d like to see Chris Herndon get some more targets in Jeremy Bates’ offense, but when he was targeted tonight, he did a nice job.  Herndon caught 3 balls for 53 yards while Jordan Leggett and Eric Tomlinson caught the only two passes that came their way for just 19 yards,

The only reason this isn’t an “F” is because the line did hit a stretch in the middle of the game where they kept JJ Watt and Jadaveon Clowney in check, allowing Darnold to get in to a bit of a rhythm.  All in all though, the Texans are just far more talented up front and the O-line gave up some key sacks late in the game.

Henry Anderson carries the group by getting a career-high three sacks while Texans running backs were held to 21 yards on 13 carries.

The linebackers got a pair of sacks between Brandon Copeland and Jordan Jenkins but far too often we saw Watson sitting back in the pocket with little pressure.  The Jets defense played with great intensity at times, but didn’t maintain it throughout.

This one is on the coaches.  Prized free agent Trumaine Johnson has been playing up to expectations in recent weeks, coming away with three interceptions over the past two games and looking like a much improved player.  However, the Jets defensive brain trust thought it better to match up their second-best cornerback (Morris Claiborne) on the Texans’ top receiver in DeAndre Hopkins.  The Result?  Hopkins finished with 170 yards and a touchdown.  Jamal Adams played with high intensity as usual, picking up a handful of tackles and a sack on third down that forced a Texans field goal.

This one isn’t an “F” because we saw the staff use Robby Anderson on a wider assortment of routes while allowing Sam Darnold to spread the ball around, completing passes to nine different receivers.  In the end however, the defense faltered and gave away the lead that the offense handed them with five minutes remaining in the game.  And again, Todd Bowles’ defense has no answer for a one-dimensional offense with just one real threat to defend in Hopkins.