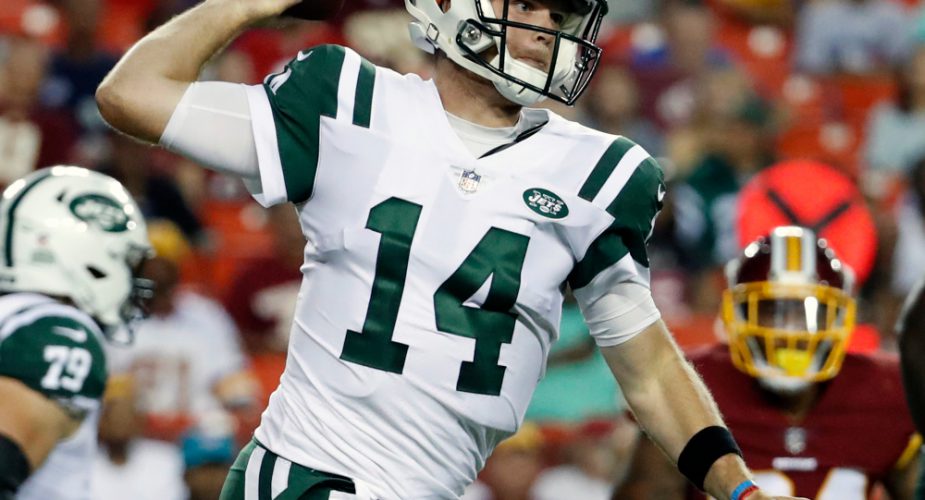 Nothing removes the stink from a bad team faster than a win.  Not just any win either, but a blowout win on the road with your franchise quarterback turning in one of the best performances of his young career.  Sam Darnold threw a career high four touchdowns in leading Gang Green to a 34-17 win over the Washington Redskins and there were plenty of impressive performances to go around.  How did they grade?

Darnold misses out on an A+ because of a poor decision that led to an early interception when the QB was feeling some heat.  In fairness to Darnold, if Ty Montgomery doesn’t alligator arm the pass, it’s a reception for no gain.  Even with that ill-advised throw, Darnold finished the day 19-30 for 293 yards and four touchdowns.  Some will discount the performance due to playing a terrible Redskins team, but in reality, one thing the Redskins do fairly well is defend the pass.  Prior to the contest, Washington was 14th in the NFL in pass defense and had given up 15 TD passes through their first nine games (1.6 per game) but Darnold had little trouble moving the ball and getting in the end zone.

There weren’t many big plays out of the backs today, but a couple of good runs out of Bilal Powell and a rare reception out of the slot for Le’Veon Bell all played a role in the Jets offense looking much better.  On the ground, Bell, Powell, Ty Montgomery and Josh Adams combined for  118 yards and a touchdown on 31 carries.

It was a triumphant return to Washington for Jamison Crowder who logged 5 receptions for 76 yards and a touchdown while Robby Anderson had a 6-yard scoring grab of his own.  Demaryius Thomas had an impressive one-handed grab late in the game and finished with 4 catches for 44 yards.  Vyncint Smith had a rough day with a fumble on special teams and a drop later on in the game.

Ryan Griffin has established himself as a guy who needs to be retained this off-season if not sooner.  He had a huge day with 109 yards on 5 receptions and a touchdown.  Daniel Brown had his first reception as a Jet when he finished the Jets first drive with a 20-yard touchdown catch.

Losing a starting player to IR is rarely a good thing, but from a purely football standpoint, the Jets O-line may have improved by losing Ryan Kalil and Brian Winters for the season.  Kalil has been a disaster at center and Winters has been playing with too many injuries to be effective.  Both Jonotthan Harrison and Tom Compton should represent upgrades at both spots and it showed today.  Sam Darnold had plenty of time to throw more often that he’s become accustomed to and the running game showed some life.  Chuma Edoga was over matched by Ryan Kerrigan early on and surrendered a pair of sacks.  Once he left with an ankle injury, the ‘Skins didn’t get to Darnold once.

Rookie Chuma Edoga got steamrolled twice by an elite player in Ryan Kerrigan. Beyond that, the O-line didn't surrender a single sack.

This depth on this group is the best it has been in years.  Nathan Shepherd had his second sack in as many games, Henry Anderson had one of his own, while Adrian Peterson and Derrius Guice were held to 49 yards on 16 carries.  Kyle Phillips flashed on a few plays as well as the undrafted rookie free agent continues to impress.

Jordan Jenkins didn’t get a sack this week but showed up with a big batted pass on 4th down that forced a turnover while Neville Hewitt grabbed his second interception of the season.  Frankie Luvu and James Burgess shared a sack as the Jets defense got to the quarterback six times for the second week in a row.

Jamal Adams led the way with a dominant performance, coming away with three sacks, giving him five over the past two weeks.  In his first NFL start, Bless Austin impressed once again, picking up a pass defended and preventing any big plays through the air.  Marcus Maye did surrender one deep completion but big plays were few and far between.  In fact, Washington’s bigggest play of the day came on a pass to Darrius Guice out of the backfield that saw him take advantage of some bad angles and sloppy pursuit from the Jets front seven.

Not much doing in terms of the return game and Sam Ficken went 0-1 on field goals and 4-5 on extra points.  Lac Edwards averaged 46 yards per punt.

Give credit where it’s due.  Adam Gase did many of the things we’ve criticized him for failing to do for much of this season.  We saw Sam Danold roll out, we saw Le’Veon Bell get targeted out of the slot, we saw more opportunities for Ryan Griffin and at least one deep shot to Robby Anderson that was overthrown, but can help keep a defense honest.  If we saw more if this from Gase early on, this team might have an extra win or two.  Gregg Williams also had his defense ready to play as they surrendered just 11 points before a garbage time TD made the game look closer than it actually was.