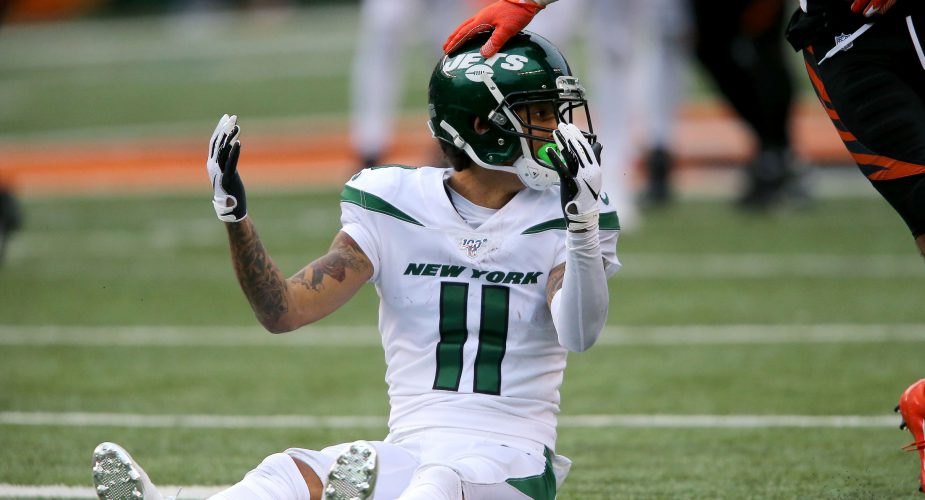 It looked like the Jets were on the brink of blowing a big lead to the lowly Miami Dolphins and if not for a costly penalty that put the Jets in field goal range, Adam Gase and company may have done just that.  In the end, a Sam Ficken field goal as time expired lifted the Jets to a 22-21 victory.  How’d they grade out?

Not a great day for Sam Darnold who was playing well early on but was victimized by some big drops, but then saw a drop-off in the second half as he missed one open receiver after another.  Darnold also had a bone headed interception with at least one more pick that was dropped by the Dolphins defense.  Not his best showing, but as a 22-year-old playing in just his 23rd NFL game, fans hitting the panic button should probably relax.

The Jets running game came to life with Bilal Powell and Ty Montgomery in the backfield.  Powell rushed for 74-yards, a new season high for Gang Green.  Ty Montgomery also chipped in 31 yards on 9 carries.

Robby Anderson made himself some money today.  The pending free agent had a big day that would have been much bigger if not for several Darnold misfires.  In the end, Anderson finished with 7 receptions for 116 yards and a touchdown.  Vyncint Smith also showed some impressive catch-and-run ability on a quick pass that he turned in to a 37-yard gain on the game’s final drive.

Robby Anderson over his past three games…18 receptions for 303 yards and 2 TD's.

If Darnold is on target today, those numbers are much higher.

Ryan Griffin left the game with an injury early in the first quarter and did not return.  Daniel Brown was open deep down the sideline at one point on a play that had a chance to be a long touchdown pass but Darnold misfired along the right sideline.  In the end, tight ends had just 2 receptions for 15 yards.

Sam Darnold had decent protection for much of the day but there were some breakdowns that forced the QB to improvise and make plays under duress.  As far as the run blocking goes, Adam Gase finally took advantage of an opponent’s weakness and let him blockers eat up some yards on the ground.

Quinnen Williams was off to the best start of his young career as he blew up several plays early one before leaving with an injury.  Steve McLendon had a pair of tackles for loss and Nathan Shepherd was also around the ball quite a bit.  Ryan Fitzpatrick picked up 65 yards on the ground as he did a good job adjusting when the Jets D-line collapsed the pocket.

The Jets gave up over 360 yards but the linebackers were a big reason why the Jets kept the Dolphins out of the end zone.  Jordan Jenkins picked up a pair of sacks that were due solely to his relentless motor on plays that saw Fitzpatrick hold on to the ball forever and James Burgess led the team in tackles with 13.

The secondary was beat for 265 yards passing but they held up in the red zone, refusing to give up a touchdown all day.  Nate Hairston had his first interception as a Jet Gregg Williams’ decimated secondary did the best they could with what they had.

Sam Ficken hit the first game winning kick of his career in what he said was the biggest kick he’s ever made so that earns immediate high marks.  Braxton Berrios had one punt return for 12 yards and the Dolphins had just 7 yards on their lone punt return attempt.

The offense wasn’t slowed by Gase’s play calling but by Darnold’s inaccuracy.  Gregg Williams did a fantastic job with a defense that is missing many of its top players.

Next up, Thursday night football to take on Lamar Jackson and the Baltimore Ravens in Baltimore.

By Glenn Naughton
Posted on December 8, 2019