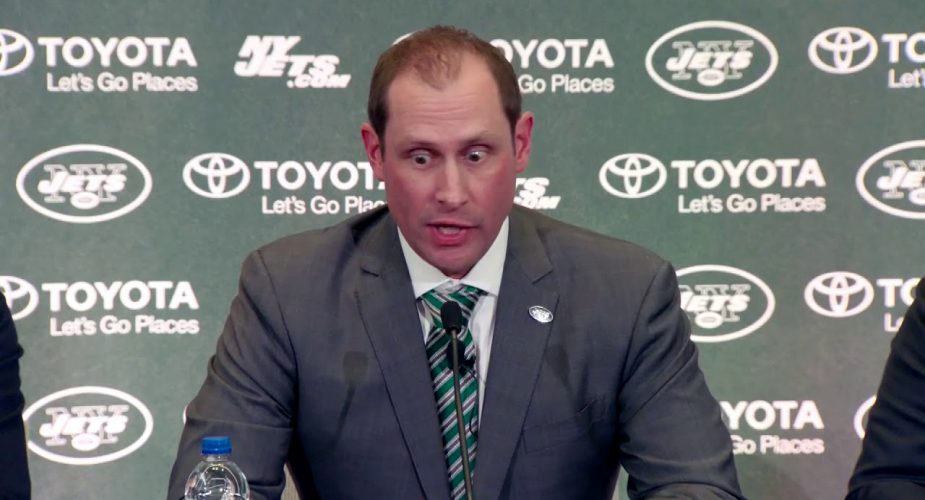 It’s time to end the Adam Gase experiment as soon as possible.  For the third time in three weeks the Jets didn’t just lose a football game, but they looked completely lost on both sides of the ball in doing so.  This one was a 36-7 blowout that wasn’t nearly that close as things fell apart in a hurry.  How’d the grade out?  Let’s take a look.

Sam Darnold had some moments but threw three interceptions, two of which were returned for touchdowns.  Darnold also left points on the board by failing to locate open receivers at times as he continues to regress under the watchful eye of Adam Gase.  Games like this will end any debate as to whether or not the Jets should be taking a quarterback at the top of round 1 in 2021.

None of the Jets backs managed to muster even 4 yards per carry and none found the end zone.  Nothing special, but the fact that they weren’t a complete disaster might earn them the highest grade on the day.

Very little separation was evident from the TV angle and there were several plays where we saw protection hold up but pressure still came as nobody could shake loose.  Braxton Berrios had himself a decent game as he scored a TD for the second consecutive week and Lawrence Cager had a pair of catches for 35 yards in his NFL debut.  Berrios and Cager had the only catches of the day for the receivers as they combined for 99 yards on 6 catches.

A whole lot of nothing again from the tight end group as Ryan Griffin dropped a gimme completion that would have converted a third down and Chris Herndon continues to be used on swings and screen passes, pulling in 3 catches for 21 yards.

Mekhi Becton left the game early with a shoulder injury because of course he did.  The backups on the line had Darnold running for his life far more often than you’d like to see and the running game didn’t do a whole lot of anything either.

This defense is getting shredded on a weekly basis but they contained a Colts running game that’s powered by one of the top offensive lines in the NFL.  However, zero sacks and not enough pressure to earn anything more than a C-minus.

Running backs and tight ends were a factor in the passing game all day long as jets linebackers weren’t able to do a whole lot.  Avery Williamson was an upgrade over Alec Ogletree and undrafted rookie Bryce Huff made his debut as a pass rusher and looked to get a hand on a Philip Rivers pass to break up a pass attempt.

This group continues to struggle in getting off the field on third down and teams appear to move the ball at will.  The Colts didn’t post any gaudy stats but didn’t get the ball much early on and didn’t operate with much of a sense of urgency when the game was out of hand.  Philip Rivers rarely saw a pass hit the turn as he completed 17 of 21.

Sam Ficken hit his only extra point attempt so that makes him one of the team’s top performers on the day along with Berrios.  Braden Mann averaged 42 yards per punt and Josh Malone averaged 18 yards per kick return.

There were definitely some play calls that would have led to big plays had the execution been better, but there’s still no denying that Sam Darnold continues to regress under a coach who was brought in to help him grow.  Rumors regarding Gase’s job security are swirling and if the team were to dump him before Thursday’s game, would anyone be upset?

On defense, Gregg Williams hasn’t been much better as tackling continues to be an issue.

It's over for Adam Gase.

Just a matter of timing now.