JetNation.com, the most active independent New York Jets community on the web, is pleased to announce that Tyson Rauch has

1) Pace, Revis out- The Jets have ruled out Calvin Pace and Darrelle Revis  for Sunday’s game against the Dolphins. 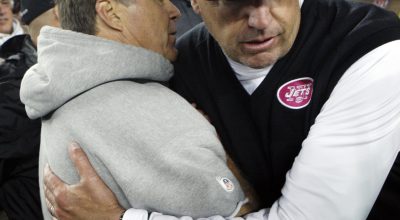 1) Revis hurt? The news of the day is that All-Pro cornerback Darrelle Revis was limited in practice due to

Put up or shut up time for the NY Jets

Well Jets fans the wait is finally over.  All of the moves have been made and words have been spoken,

Jason Taylor ready to make plays for the NY Jets

When the Jets signed Jason Taylor the thinking was that he would help the defense generate a pass rush.  The

Ray Lewis dead-on with his assessment of the NY Jets

Well football fans the wait is over.  The 2010 NFL season is set to begin Thursday night (8:30 EST) with