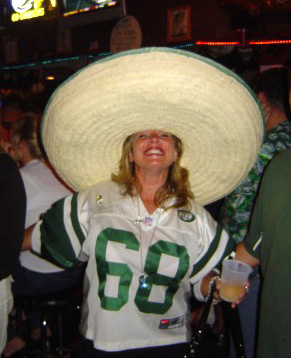 2. Could a killer bee really kill you? Would it hurt? How long would you be dead for?

It’s a killer be, right? So, of course it would kill you. Kill you dead and for a long time.

Hey, I once dated a man who called his pecker THE STINGER. I got stung. I’m not dead. Good thing it wasn’t a killer bee.

Jet will go undefeated to their first Lombardi trophy since Broadway Joe made his famous guarantee. Heck, I guarantee it!

4. Did Jason Giambi do steroids in July?

No juice for my boy. Those guns come naturally.

5. Is it rude for a man to chew beef jerky on a first date?

My name isn’t jerky, it’s Brenda. So, yes, it would be quite rude.

6. What is the answer to life, the universe, and everything?

‘lemme ask Kevin. He knows everything.

7. What is more attractive in a man…well hung with no money or nothing going on downstairs with a HUGE wallet?

How long is his tounge?

9. We all know that the Ottoman Empire was an imperial power centered around the borders of the Mediterranean Sea that existed from 1281. Please describe for us why this empire fell. Also if you were in charge, what would you have done differently?

Ottoman’s are so 70’s. The umpire fell with the advent of modern style and the working people’s desire for sleek and easy living. Martha Stewart started this movement, I believe. If I was in charge I would decorate everything Jet Green.

A cow. I could show off my boobies without people judging me.