I am a Sports Fan and a Hypocrite 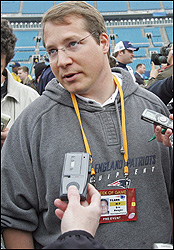 Why do we, as New York Jet fans, wish for Eric Mangini of the hated New England Patriots to be our next head coach and savior? Yet the real possibility that Eric Mangini would remain with the New England Patriots would make us despise him and Bill Belicheck for devising defensive strategies to thwart our offense for years to come. Why do most Yankee fans welcome Johnny Damon as the next centerfielder to patrol the hallowed ground at Yankee Stadium but loathed the Caveman as a Boston Red Sox player?

Does being a sports fan have such a drastic effect on our subconscious that it turns us into psychopaths? What is it that makes us overvalue a player if he is on â€œmyâ€? team and be blinded by team loyalty to that playerâ€™s true abilities?

Maybe us sports fans do not like to deal with reality–I know it is easy for me to take the past New York Jets season and say it was all because of injuries or karma or plain bad luck. Maybe it was because of bad coaching, bad players, bad drafting and injuries. No, that sounds too logical to me.

Going back to the Eric Mangini dilemma: Is he the right coach for the New York Jets to hire? He has the background, work ethic and pedigree to say positively yes.

If the football gods decide that he is not going to be the next Jet coach, I unequivocally state Mangini had little or no authority in the New England defensive play calling, the player personnel used and/or strategic match-ups.

What Kind Of Fan Are You?