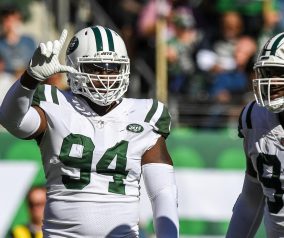 Jets fans hoping for the eventual return of free agent defensive end Kony Ealy may not be happy to hear [...]

There’s no denying that Pro Football Focus has their share of critics and believers in regards to just how much [...]

National writers do it.  Beat writers to it. Wannabe beat writers (aka bloggers) do it.  Fans, from the die-hard to [...]

Eariler this week, Jets defensive lineman Kony Ealy was missing from practice for what the team was only call an [...]

Pro Football Focus, the website dedicated to watching every single player on every single snap of the NFL season released [...]